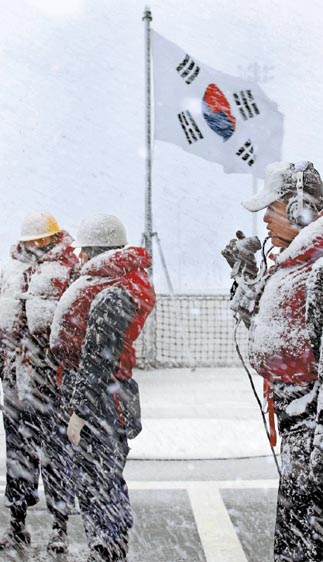 Navy sailors stand guard yesterday on the deck of the Euljimundeok despite a strong snowstorm as the destroyer returns from patrolling seas where South Korea’s five border islands are located. By Cho Yong-chul

North Korea has been training its special forces for a surprise attack on South Korea’s western border islands, going so far as to simulate a takeover of them, according to Radio Free Asia yesterday.

“From mid-December, divisions within North Korea’s navy, like the sharpshooting brigade and reconnaissance bureau, have been involved in landing drills in the waters off the coast of Nampo,” RFA said, citing a source in China well-informed about North Korea. Nampo is a North Korean city and seaport located in South Pyongan Province.

The order for the exercise was given by North Korean leader Kim Jong-il and his son Jong-un, who demanded the border islands be taken over in the event of a sudden conflict, the anonymous source said.

The source said that the information had come from a North Korean military official in Pyongyang, saying that the exercises were being conducted to “break the will of the South Koreans who have been promising strong retaliation ever since the Yeonpyeong Island shelling.”

North Korea’s plan is to shell the islands with coastal artillery on a moonless night, render South Korean soldiers at military bases on the islands helpless, then take over the territory with soldiers landing on hovercrafts, the source said.

The source added that the South Korean military wouldn’t be able to rescue the islands because they are so far from the mainland. Westernmost Baengnyeong Island is 191.4 kilometers (119 miles) from Incheon on the mainland.

North Korea also allegedly said that South Korean troops couldn’t easily retake the islands in fear of the North’s nuclear weapons, and U.S. troops in the South would be immobilized in such a hostage situation, the source said.

North Korea said the South would fail in its attempt to take back the islands because the North’s military far outnumbers the South’s in terms of manpower, the source said.

According to a white paper released by the Ministry of National Defense yesterday, North Korea has 1.02 million men in its army alone, double the South’s 520,000.

“Regarding the threat that is North Korea, we have confirmed that North Korea now has an additional 20,000 men in its special forces,” said Chang Gwang-il, deputy minister for policy at the Defense Ministry. “We have records that North Korea has incorporated a new division at the border and made other changes to strengthen their special forces.”

The ministry also said that North Korea now has 4,100 tanks, 200 more than 2008, and has constantly been developing new submarine models as well as ballistic missiles and chemical warfare agents.

North Korea has been observed conducting winter military training. Another source well-informed on North Korea cited by RFA said that the squadron on the western coast would start holding defense exercises early next month, simulating an attack by the South.