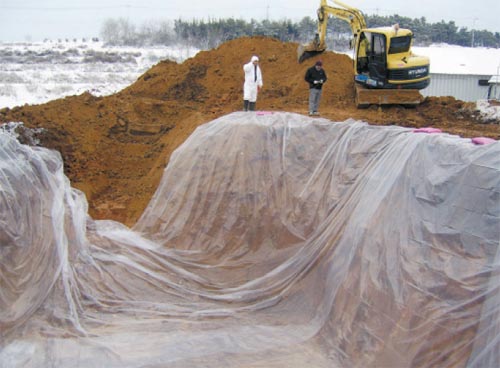 Health officials prepare a pit for slaughtered chickens yesterday in Iksan, North Jeolla, after a local chicken farm reported a suspected case of the avian influenza, the second such case in the nation. [YONHAP]


Avian influenza, the bird flu that can also sicken and kill humans, could be spreading in Korea after poultry farms in both South Chungcheong and North Jeolla reported suspected cases, according to the government yesterday.

If these poultry farms are confirmed to have the H5N1 flu virus, Korea will be plagued with infectious animal diseases on a nationwide scale, except for South Gyeongsang, South Jeolla and Jeju. Since Nov. 29, foot-and-mouth disease has spread to five cities and provinces and led to the culling of around 550,000 livestock.

The Ministry for Food, Agriculture, Forestry and Fisheries said yesterday that one duck farm in Cheonan, South Chuncheong, and a chicken farm in Iksan, North Jeolla, reported suspected cases of the avian flu virus the day before. Health officials are ramping up quarantine measures in case the two farms are confirmed to be infected. Hundreds of chickens at the Iksan farm have already died. Test results are expected this morning.

Health officials in North Jeolla yesterday slaughtered and buried 17,000 chickens at the Iksan farm and 90,000 chickens from another farm within a 500-meter (1,640-foot) radius.

A high-ranking official of the Food Ministry who requested anonymity said yesterday, “Although an exact confirmation will come out in the morning, quarantine measures are being carried out with preventive slaughters corresponding to a threat of a plausible influenza pandemic.”

A factory run by Harim, the nation’s biggest chicken company, is located about 600 meters away from the Iksan chicken farm, along with a slew of poultry houses the company buys from. If health authorities apply control measures that include killing of poultry within a 3-kilometer (1.9-mile) radius of the infected farm, the losses are expected to be significant.

Around 10,700 ducks have been slaughtered at the farm in Cheonan in South Chungcheong. Strict transport restrictions are also in place with quarantine posts expanded.

Kim Hong-bin, livestock director for South Chungcheong, said, “As the avian influenza showed up near a wintering place for migratory birds, it is likely that the virus is the highly pathogenic avian influenza. [We will] utilize all manpower and equipment to block the spread of the disease.”

Avian influenza can jump to human via feces of infected birds or direct contact with infected poultry. However, antivirals are available.

Professor Kim Jae-hong of the College of Veterinary Medicine of Seoul National University said, “If humans get the virus, they show symptoms such as a high fever and cough, like with seasonal flu, after an incubation period of up to 14 days.”