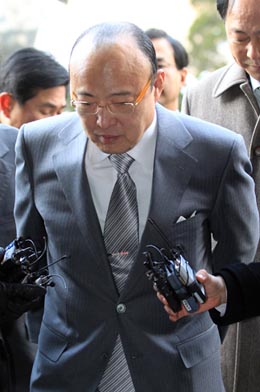 Prosecutors summoned Hanwha Group Chairman Kim Seung-youn to the Seoul Western District Prosecutors’ Office for a probe on charges of raising a slush fund with his company’s money.

It was the third investigation of Kim, following two interrogations conducted on Dec. 1 and 15.

Kim turned himself in at the office at 11:45 a.m. yesterday and kept saying, “I don’t know,” when reporters asked him if he thought the two previous probes were insufficient to prove his innocence.

In the yesterday’s questioning, prosecutors said they would concentrate on whether Kim used a slush fund to financially help his first son Kim Dong-gwan, who tried to buy shares of an IT company.

The prosecutors said yesterday that they will wrap up the investigation of Kim after the third interrogation and decide whether to indict him.

Since it was reported in July that Kim had five bank accounts under false names, the prosecutors have suspected that he might have illegally supported subcontractors and diverted about 1 trillion won ($879 million) in creating the slush fund.