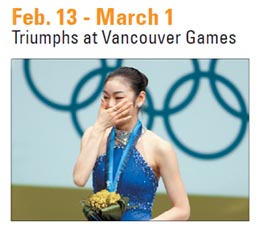 Coming off a dominating 2009-2010 International Skating Union season, Kim Yu-na blew away her competition once again at the 2010 Vancouver Olympic Winter Games in March with a record-setting performance.

Kim delivered Korea’s first Olympic gold medal in figure skating by scoring 78.50 in the short program and 150.05 in the free-skate program, for a combined total of 228.56 points a world record under the new scoring method.

Korea also got several surprise performances from its long-track speed skaters in Vancouver, Canada. A powerhouse in short-track, Korea had failed to win a single gold on the long-track since the country started competing in the 1948 St. Moritz Winter Games.

A trio of Korea National Sport University students changed all that. Mo Tae-bum (500 meters), Lee Sung-hwa (500 meters) and Lee Seung-hoon (10,000 meters) each won a gold to help Korea to its best-ever finish at the Winter Olympics with six gold, six silver and two bronze medals. 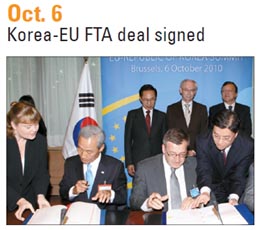 Korea signed free trade agreements this year with two of the world’s largest trading blocs, the European Union and the United States, putting it well ahead of other Asian countries in gaining access to key export markets.

The EU deal is considered the more important of the two because the EU is a larger market and average EU tariffs on Korean products are much higher than in the U.S. Korea’s trade with the EU already exceeds its trade with the United States and is expected to grow further in such sectors as autos, which are now subject to a 10 percent EU tariff. The FTA will go into effect on July 1 next year after it was signed in October.

The agreement with the U.S. amounts to a revision of the original FTA that was signed in 2007 but was then stalled by the U.S. Congress. It is generally considered that Korea gave up the most in reaching the deal in early December because it conceded to U.S. demands on auto imports while gaining only minor concessions in return. But the trade pact, which must still be approved by the legislatures in both countries, is likely to benefit both sides in the long-term. 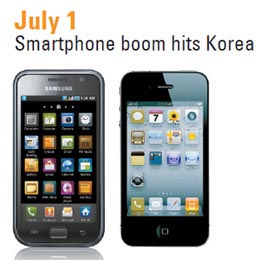 As if we couldn’t get more distracted by technology, smartphones took Korea by storm in 2010, ensuring countless hours of thumb-tapping and finger-sliding for the foreseeable future. Apple’s iPhone was the catalyst, despite its belated entry into the local market at the end of 2009. Koreans, with their tech-savvy lifestyle and high levels of mobile phone and broadband usage, went gaga for the gadget.

In just over a year, it’s fair to say that smartphones have changed the way Koreans live, work and socialize. Sure, you can still place a call on them, but that’s just so 2007. Whether it’s checking the day’s headlines or doing some online shopping and keeping tabs on Twitter, smartphones in Korea have become about as ubiquitous as aggressive ajumma. Just look up from your phone the next time you’re on the subway: you’re not alone.

Smartphone fever also served as a clarion call for Korea’s IT companies. Samsung and LG Electronics - the world’s No. 2 and No. 3 mobile phone makers - had been asleep at the wheel. But they caught up, making their debuts seem less like tardiness and more like an act of being fashionable. Samsung’s Android-based Galaxy S has mounted the strongest challenge to the iPhone with more than 2 million units sold in Korea and 10 million worldwide. 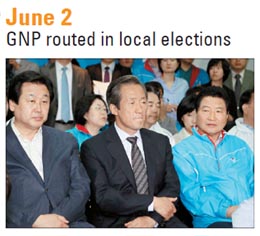 The GNP’s defeat was seen as a rebuke to Lee and his ruling party for what voters perceived as the government’s high-handedness. Pushing through unpopular infrastructure and development projects had prompted serious public criticism before the elections, and analysts said the elections were more of a defeat for Lee and his administration’s domestic agenda and governing style than a victory for opposition parties.

A return of liberal politicians who had close ties with the late former President Roh Moo-hyun was also a key factor. They scored victories in many key races, even those that were traditional strongholds of the conservatives. 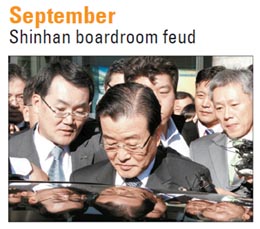 This year was supposed to be Big Bang time for the banking industry with the privatization of Woori Financial Group. But the deal to sell at least half of the government’s 57-percent stake in the country’s biggest banking group fell apart after the two leading frontrunners dropped their bids, complaining about the premium price that officials were demanding.

Another long-delayed bank sale, however, went through as Lone Star, the U.S. private equity fund, finally found a buyer for its controlling stake in Korea Exchange Bank, with Hana Bank scheduled to take over the bank in early 2011. Lone Star had previously encountered various bureaucratic and legal obstacles in disposing of KEB since the mid-2000s.

Two other episodes did not show the banking industry in the best light. One intense boardroom struggle at Shinhan Financial Group led to the departure of its three top executives amid criminal allegations.

Meanwhile, the collapse of the sale of Hyundai Engineering & Construction to Hyundai Group raised questions about the initial due diligence conducted by the creditors in assessing Hyundai Group’s bid.