For Lee, the loving care of a mother has no limit

For Lee, the loving care of a mother has no limit 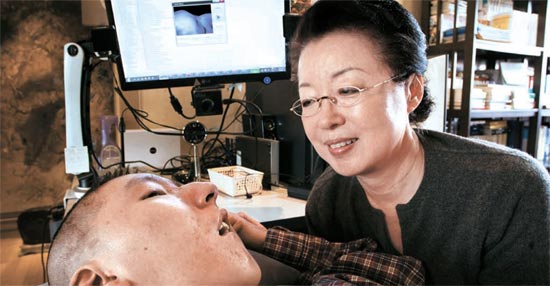 Lee Won-ok, right, smiles at her son, Shin Hyeong-jin, at their home in Gangnam, southern Seoul. Shin, who suffers from Spinal Muscular Atrophy, will graduate from Yonsei University in February. By Cho Yong-cheol

For the last 21 years, Lee Won-ok brought her paralyzed son to school, picked him up after class, and even waited outside the classroom in case a medical emergency occurred.

For over two decades, Lee’s dedication to her son Shin Hyeong-jin’s education had no limits. Since doctors told Lee that they did not expect her son to see his second birthday, the pair have battled through a lot to overcome his limitations.

Now 27, Shin wrote his last exam on Dec. 20. He is set to graduate from Yonsei University with a computer science degree in February.

Shin was born with Spinal Muscular Atrophy (SMA), which is a neuromuscular disease that is characterized by a degeneration of motor neurons, resulting in progressive muscular atrophy.

When the JoongAng Ilbo paid Shin and Lee a visit at their family’s apartment in Gangnam, southern Seoul, on Dec.18, he was busy studying for the exam.

“He can now study on his own thanks to the eyeball mouse. Before, I had to turn pages for him. We’d study past midnight,” said Lee, looking at her son.

Shin has a specially engineered computer mouse that he can control by moving his eyes.

It wasn’t until seven months after birth that Lee realized her son was suffering from a muscle-related disease. After several months, doctors diagnosed Shin with SMA.

“It was just two days before my son’s first birthday when he was diagnosed with SMA in the United States,” said Lee. “Where other 1-year-olds have a birthday party, Hyeong-jin got a death sentence.”

Not wanting to overburden her son, Lee did not teach him Hangul. After all, doctors did not give him more than a year to live.

Shin’s school life was not easy. On several occasions he had to be hospitalized for up to a month after coming down with pneumonia. Of six years of elementary school, his accumulated sick days amounted to three years.

“I felt more nervous when he went to class because he also had difficulty breathing.

“If he can’t breathe, he dies. I used to always wait outside the classroom with an air-mask-bag unit,” Lee said, referring to a manual resuscitator.

Despite his health problems, Lee said Shin enjoyed going to school, so she refused some teachers’ advice to put him into a more specialized institution.

For Lee, it was not burdensome. “My son taught me what life is all about,” she said.

In 2004, Lee took her son to the United States for his grandmother’s 80th birthday. But just a day after arriving, Shin was sent to the emergency room. The ill-equipped hospital in a suburb of Los Angeles did not have the facilities to help him.

Time was running out for Shin as his breathing slowed. In an act of desperation, his mother contacted an acquaintance at the National Assembly to see if there was anything he could do.

It turned out that he was able to put the desperate family in touch with the then-commander of United States Forces Korea, Leon J. LaPorte.

For the family, LaPorte’s actions were nothing short of a miracle. The general sent a U.S. Air Force plane from Korea to transport the family back home so Shin could receive medical care from four U.S. Army doctors.

“A country to which I never paid a single penny of tax money saved my son’s life,” said Lee.

Lee and her husband donate thousands of dollars annually to Gangnam Severance Hospital in southern Seoul.

Lee expressed gratitude for her two daughters. “They grew up so well, although I could not give them the attention they deserved,” she said.

After refusing to be interviewed, Lee changed her mind to deliver hope for kids everywhere who suffer from illnesses like Hyeong-jin.

“A kid who was said will die within a year has survived 27 years, and is going to wear a graduation cap. Others can do it, too, as Hyung-jin did. The only thing is not to give up.”