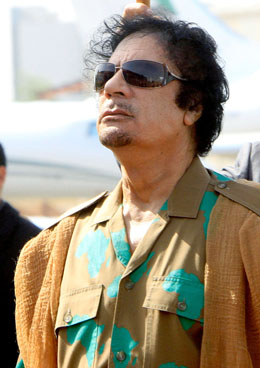 Libya’s announcement Wednesday that it would release two Koreans detained for alleged missionary activities ends a months-long diplomatic row that brought the 30-year-long relationship between Korea and the Muslim country to the brink of collapse.

According to diplomatic sources, the spat was resolved after strenuous efforts on the Korean side and the highly favorable view of Korea by Libyan leader Muammar el-Qaddafi.

Sources told the JoongAng Ilbo that Qaddafi promised to resolve the row, which started when Libya accused a Korean agent of spying on the Libyan leader’s family, at a meeting with Lee Sang-deuk, elder brother of President Lee Myung-bak, in October.

Lee flew to Qaddafi’s home town, 200 kilometers (124 miles) out of Tripoli, and met the Libyan leader in a pavilion set up in the desert on Oct. 3.

“I thought of Korea as a brother country,” Qaddafi was quoted by the sources as saying to Lee. “How could things like this happen [between us]?”

“It is a misunderstanding,” Lee told Qaddafi, according to sources. “It’s something that could never happen. Can’t you read the earnest intention of our President, who sends his older brother, who’s over 70 and not healthy, to Libya?” After more conversation, the sources said, Qaddafi finally said: “Then let’s put this matter behind us and open a new chapter of cooperation between Libya and Korea.”

Ties between Seoul and Tripoli deteriorated rapidly after an intelligence agent at the Korean Embassy in Libya was detained, questioned and deported in June.

Following the deportation of the agent, the Economic Cooperation Bureau of Libya suspended its operations in Seoul, and its diplomats returned home on June 24.

Libya arrested two other Koreans, surnamed Koo and Jeon, in June and July and charged them with carrying out missionary activities.

When Lee met with Qaddafi in October, he pleaded that Libyan diplomats be returned to Seoul, that Korean companies wouldn’t suffer any repercussions and that the two detained Koreans be released.

Qaddafi said he would have all those things done and left the pavilion, the sources said.

Koo and Jeon were also released from detention two days later, although they were banned from leaving Libya because of a remaining court hearing. On Wednesday, Qaddafi ordered them released from the country, the sources said.

The sources said Qaddafi likes Korea and often mentioned it as the best model for Libya to transform from a developing country to a developed country.