Street stalls and tent restaurants selling steamy, sweet-smelling snacks announce the start of winter in Korea. There’s always a long line in front of the stalls, with people blowing on hot fish cakes or munching on warm pastries. Pull up a chair and give these tasty snacks a try, but before you do, check out this guide to some of the most common winter treats to keep you warm. 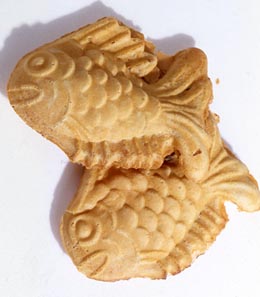 Bungeoppang is a fish-shaped pastry and may be the most popular winter treat among Koreans. The batter is poured into a fish-shaped mold and a sweet red bean paste filling is added. “Bungeo” is a crucian carp and “ppang” is bread.

There are similar treats like ingeoppang, a fish-shaped pastry, gukhwappang, a pastry shaped like a chrysanthemum, and gyeranppang, a pastry filled with an egg instead of red bean paste.

Bungeoppang tastes best when eaten right after it is taken off the grill and is still crispy on the outside.

Usually, you can purchase three to four bungeoppang for around 1,000 won (90 cents) and vendors baking bungeoppang can be seen nearly everywhere in Seoul.

Bungeoppang has been popular in Korea since the 1930s. Though the tastes of young Koreans have changed a lot since that time, the snack still remains a favorite during the winter, and brings back childhood memories to the older generation.

There’s even a saying that uses the word. If you look just like your father, you may hear Koreans say, “You and your father are just like bungeoppang.”

There’s also a fun way to learn about your personality based on which part of a bungeoppang you bite first. If you eat the head first, you are an optimist but also obstinate and quick-tempered with strong leadership skills. If you eat the fin first, you prefer being alone to hanging out with others. You are generous, warm-hearted and have some artistic talent. Those who eat the stomach first are masculine, active and very social, while those who eat the tail first are very cautious and considerate and also fashion-conscious romantics.

Hoppang is a white steamed bun made of wheat flour dough and filed with various ingredients. Traditional hoppang, the most popular, is filled with red bean paste and vegetables, but other fillings include meat, kimchi, pizza, curry, blueberry, spicy chicken and chocolate.

There is also a healthy variety of hoppang with fillings such as barley, black rice, pumpkin and green peas.

To please the eye and add a little variety, the dough is sometimes mixed with spinach or yellow paprika to make green and yellow hoppang.

Hoppang comes pre-cooked in a steamer and is sold throughout the winter at convenience stores, small independent grocery stores and large discount retailers. Each bun is around 700 to 1,000 won.

“Ho” is sound of laughter in Korean and also comes from the Korean onomatopoeia for blowing on food to cool down before you eat. 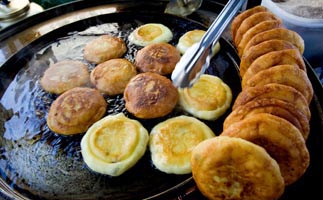 Hotteok is just one of the many seasonal treats available at street-food stalls in Korea during the winter months. [JoongAng Ilbo]

Have you seen people walking on the street, eating a pancake from a small paper cup or wrapped in thick white paper? They are eating hotteok, a sweet Korean pancake made of wheat flour and filled with brown sugar, cinnamon and chopped peanuts. Fist-sized yeast dough is left to rise for a few hours, and then the dough is stuffed with ingredients and placed on a griddle. Hotteok bakers use a special tool to press the dough flat and make a big round pancake fried in oil. Vendors fold the hotteok in half and serve it in a small cup because it is extremely hot right off the grill. The smell is hard to resist, so be careful not to burn your mouth.

This sweet, deep-fried pancake is a favorite. There are also healthy varieties, including green tea hotteok, bokbunja (black raspberry) hotteok and corn hotteok.

For those who can’t find hotteok vendors in their neighborhood, hotteok baking mixes are available at supermarkets.

On most evenings, hotteok literally sells like hotcakes, with dozens of people lining up for a 500-won pancake. Koreans often say, “It’s like a hotteok stall on fire,” when describing a restaurant with a stream of customers or any other place where many people gather. The expression originated because hotteok has been a popular snack since it was introduced to Korea by Chinese immigrants in the late 19th century. 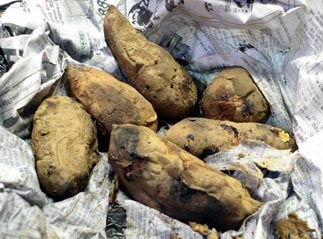 Most winter treats are high in calories, but there is a low-calorie option if you’re worried about putting on extra winter weight: sweet potatoes.

It is already well-known how much fiber sweet potatoes contain and they are used in a variety of Korean recipes. Sweet potatoes can be easily cooked at home but when roasted, they taste sweeter.

Sweet potatoes sold on the street are roasted in a big iron barrel over a fire. The barrel has several holes and each hole has a drawer so that many sweet potatoes can be roasted at once.

Roasted sweet potatoes are sold in paper bags and you can usually get three for around 2,000 won. 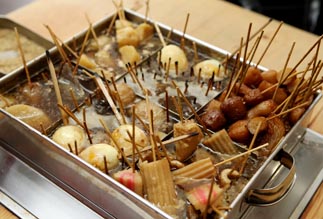 Odeng is another winter snack that is popular at street stalls, but a wide variety of odeng with different toppings can now also be found at restaurants around the city. [JoongAng Ilbo]

Odeng, or fish cake, is a popular food in the winter and is sold at street stalls and in bars.

Street stalls selling odeng are equipped with a square pot to cook the odeng and broth. The delicious-smelling broth is made by simmering it with radishes and kelp. Pick a fish cake skewer from the pot and eat it with a cup of hot odeng broth. A bowl of soy sauce is put out on the side so you can season your odeng to taste. A skewer of odeng sells for 500 to 1,000 won.

Competition among vendors is quite fierce. To survive in the market, some vendors came up with their own new recipe: red odeng. Red odeng is cooked in a sauce made with red pepper paste and is very spicy.

The popularity of odeng stalls has led to the opening of odeng bars, which serve odeng with soju, warm jeongjong, a Korean sake, and other liquors. At an odeng bar, customers usually sit around a large table in the middle of the bar, and the table has a big square pot with partitions installed just like the street stalls.

Odeng bars usually have more varieties of odeng to choose from. From their seats, customers can choose different types of odeng, from broad to flat, to those filled with cheese, crab meat or glass noodles, and they can enjoy odeng skewers boiled in the broth.

All the winter treats described above can be found on streets across the city, but patjuk is mostly sold in restaurants.

Patjuk is a red bean porridge that is traditionally eaten in Korea on the winter solstice. Koreans eat patjuk because the red color of the beans is believed to ward off bad luck or illness.

Whether it is true or not, one thing for sure about red beans is that they are great for your health.

Patjuk is made by simmering red beans with sticky rice until tender and then boiling for a long time until it becomes porridge. Then, small balls of glutinous rice powder are added. To enhance the flavor, rice balls marinated in honey or chestnuts are sometimes added as well.

Bonjuk, a juk franchise, is another place to enjoy patjuk. And at Bonjuk you can try other kinds of porridge made with various ingredients like vegetables and seafood.