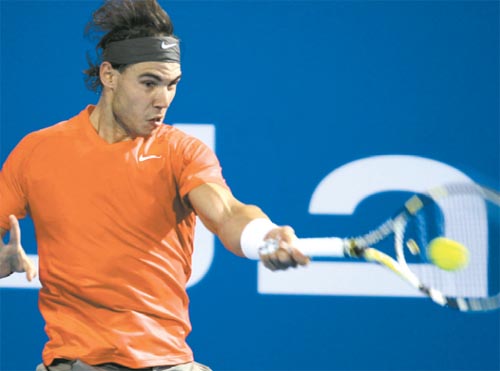 Spain’s Rafael Nadal returns the ball to Roger Federer of Switzerland during the final match of the Mubadala World Tennis Championships in Abu Dhabi, U.A.E. on Jan.1. [AP/YONHAP]


DOHA, Qatar - World No. 1 Rafael Nadal will begin the new season, which starts at the Qatar Open here on Monday, on a high note after beating rival Roger Federer in the final of the Mubadala World Tennis Championship in Abu Dhabi this weekend.

The Spaniard arrives in Doha head and shoulders above the rest of field, more than 3,000 points ahead of world No. 2 Federer and with three of the last four Grand Slam titles under his belt.

Nadal’s hopes of winning the Qatar title for the first time have been boosted by the 7-6 (7/4), 7-6 (7/3) win over Federer in the final of the Abu Dhabi exhibition match on Saturday. The two are set to meet again as No. 1 and 2 next week at the Qatar Open, which marks the start of the new season.

“For both of us, these are the first matches of the season. So it is special for us,” said Nadal after his win in Abu Dhabi.

Federer, who has come into the new year with a fresh mindset as he works with new coach Paul Annacone, is bidding for his third title in Doha after winning back-to-back trophies in 2005 and 2006.

“Rafael and myself must have played so many times and so many times it has come down to a few shots here and there. He is an amazing shot-maker. Me as well, but today he got the better of me,” said Federer.

Federer appointed Annacone - who steered Pete Sampras to nine of his 14 Grand Slam titles - after losing his Wimbledon title, as he bids to regain the top ranking he once held for a record 237 consecutive weeks.

The next few days may offer insights into just how likely that is. Since Annacone’s arrival there have been signs that Federer is working on countering fractional loss of speed at the age of 30.

He has been trying to reinvigorate his backhand, achieve a more consistent serve, produce crisper ground-strokes, and most crucially, generate an appetite for attacking opponents’ second serves more forcefully.

How superb Federer becomes when he achieves all these things was illustrated by his meeting with Nadal at the ATP World Tour finals five weeks ago in London where he concluded the season with a 6-3, 3-6, 6-1 win.

“I think in the beginning he was unplayable,” said Nadal. “He played unbelievable all week. When he’s playing like this, it’s very difficult to stop him.”