Escalated concern over security after a series of attacks by North Korea, followed by the armed forces’ often hapless responses to them, has led the government to promise to overhaul the military this year.

Military analysts, however, said the plans so far will do little to enable the military to prevent another North Korean attack, and some doubt the military’s willingness to implement reform in general.

In a year-end briefing to President Lee Myung-bak, the Ministry of National Defense proposed a dual top-military-command system, which it says will deal with the North in a more efficient way. If the plan receives parliamentary approval, it will mark the first overhaul of the top command system in 23 years.

Currently, the chairman of the Joint Chiefs of Staff is the top commander of South Korea’s 650,000 soldiers and has operational control over all three military branches. But the position is now considered to be overstretched, resulting in the chairman’s inability to manage military personnel and coordinate the three branches, as proven by the tardy and clumsy reactions to the North’s attacks last year. 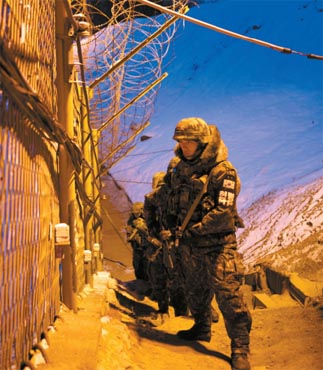 South Korean soldiers patrol the inter-Korean border on the first day of 2011. [NEWSIS]

The ministry wants to create a new post - chief of Joint Forces Command - which will be in charge of managing military personnel and wielding operational command, while the JCS chairman will set and run overall policy.

The measure is backed by Defense Minister Kim Kwan-jin, who replaced Kim Tae-young after the sinking of the South Korean warship Cheonan in March and the North’s shelling of Yeonpyeong Island in November.

The ministry is also planning on boosting weapons systems, including increasing the number of K9 self-propelled howitzers, weapons-locating radar systems and guided missiles capable of surgical strikes against hidden North Korean artillery. The budget for 2011 is up too. This year’s budget for national defense rose 6.2 percent from last year to 31.4 trillion won ($27.9 billion), which accounts for 10.15 percent of the 2011 national budget of 309.1 trillion won.

The ministry said those measures will help the military “thoroughly cope with all possible provocations from North Korea.”

Kim Hyun-wook, a North Korea analyst at the Institute of Foreign Affairs and National Security, said the ministry’s plan is a turnaround from the direction of the previous administration and can put the military back on track.

Defense Reform Plan 2020, a long-term goal set by the Roh Moo-hyun administration, stipulated the gradual reduction of military manpower from 681,000 in 2005 to around 500,000 by 2020. The North Korean military boasts 1.19 million soldiers, according to the Ministry of National Defense.

“The previous administration led military reform in an unrealistic direction, and now the country is becoming realistic again,” Kim said. “The military will be better prepared for a North Korean provocation.”

Buying and deploying cutting-edge weapons systems is necessary, military experts said, but they cautioned that the military should not forget about surprise attacks by the North as it employs asymmetrical military tactics, which in the Korean context refers to the North making small, isolated attacks against a South Korean Army armed and trained for general warfare.

Analysts and the military alike see a slim chance that the North would attempt all-out war on the Korean Peninsula because of its limited ability to survive a protracted conflict and a strong Seoul-Washington alliance reaction, which would mean its annihilation.

But, asymmetric provocations using nuclear weapons or other weapons of mass destruction, as well as its special forces, long-range missiles, submarine armaments and cyber attacks, could be growing options for the North, analysts said. 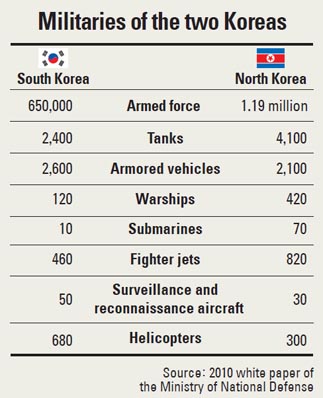 A white paper released by the Ministry of National Defense last Thursday showed that the North’s asymmetric military force has been augmented over the years. For instance, the number of its special forces, trained to quickly infiltrate South Korea, increased from 180,000 to 200,000, the paper showed. On the same day, Radio Free Asia, citing an unnamed source, warned that the North has been training special forces to seize South Korea’s five western border islands, including Yeonpyeong Island. That led some experts such as Baek Seung-joo, a senior researcher at the Korea Institute for Defense Analyses, to recommend asymmetric responses on the South’s part.

“What the North Korean regime fears most is information coming in from the outside, in terms of maintaining the morale of not only of its soldiers but also its people,” Baek said.

Past asymmetrical tactics employed by the South, including sending propaganda leaflets across the border and setting-up loudspeakers at the DMZ, were stopped in the early 2000s under the Sunshine Policy, but the military is resuming some of them.

Yoon Gwang-jun, a professor of aerospace information engineering at Konkuk University, agreed that the South needs unconventional responses to the North but he recommends using new technologies, such as unmanned robots or aerial probes to collect information on North Korean military movements.

The recent North Korean provocations are, he said, “the best opportunity to deviate from conventional, analogue response systems and build a digital-technology-based, civilian-military system.”

Apart from the ways to respond to North Korea, analysts are asking how robust responses should be.

The rules of engagement, which dictate how the military responds to attacks by the North, were criticized after the weak response to the Yeonpyeong shelling. The current rules of engagement don’t allow the South to fire more shells than the North did, and it can only fire in the direction from which the North attacked. The Defense Ministry said it is planning to revise the rules, but a ministry official said on Thursday that no specific plan has been confirmed and discussions are still ongoing with United Nations Command.

Song Min-soon, a former foreign minister and lawmaker from the opposition Democratic Party, said more cooperation from the U.S. is needed in the matter. He said aerial strikes, which Defense Minister Kim pledged against any additional North Korean attack, will be restricted even with the revision of the rules of engagement.

A stronger Korean response, therefore, is linked to the issue of the transfer of wartime operational control to Seoul, Song said. The U.S. is supposed to hand over control to Seoul in 2015.

“The military can be strong when it is allowed to draft military operations on its own,” Song said in an online posting. “Only then can it exercise its right of self-defense not by words but by action.”

Analysts also wondered whether the military is willing to carry out reforms, in particular those prompted by the Blue House, partly because of its distrust of outsiders with no military expertise. The ministry’s plans for 2011 were drafted from a 71-point reform plan written by a presidential defense-reform committee.

“The private sector has evolved through competition on a global stage, but the military has been complacent over the past 60 years since the [Korean] War,” President Lee said while being briefed by the ministry on Thursday.