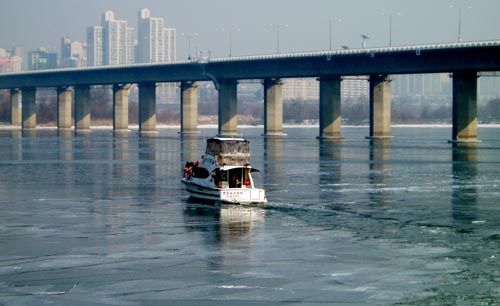 Officials from the Yeongdeungpo Fire Station in Seoul cut a way through the frozen surface of the Han River, yesterday. The river that winds through the city froze for the first time this winter near Noryangjin-dong, southern Seoul, four days later than last year and eleven days ahead of the yearly average. Temperatures have been in the sub-zero range from mid-December, with daily highs only reaching about minus-9 degrees Celsius late last month. The Korea Meteorological Administration has said that the nation is due for more cold spells and blizzards in January because of a cold air mass from the North Pole that is lingering over Asia. Also, a lot of snow is expected in the middle part of Korea and the western coast. The weather agency has been keeping track of ice on the Han River since 1906. [YONHAP]