Trade schoolers get into U.S. colleges

Trade schoolers get into U.S. colleges 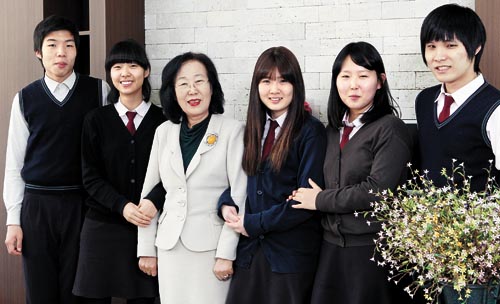 Seo Seoul Life Science High School students pose for a photo with principal Hwang Jeong-suk. The vocational school in Seoul, which focuses on improving English ability while also promoting the students’ vocational studies, succeeded in getting eight of its student into U.S. universities this year. By Kim Kyung-bin


Seo Seoul Life Science High School, a vocational school in Guro-dong, western Seoul, succeeded in getting eight of its students into universities in the U.S.

Kim Na-hyeon, a design major, can’t hide her delight over being accepted at three U.S. universities - the University of Utah, University of Minnesota, and Arizona State University - although she ultimately decided to attend Utah.

“I had no holidays and weekends, concentrating on studying English and my major,” Kim said. “I really feel proud of myself and happy.”

This is not the first year Seo has had such a success.

For the first time this year, however, all of the students in the “study abroad” class realized their dreams.

Hwang Jeong-suk, principal of the school, said she poured all of her energy into improving her students’ English abilities in daily after-school classes from 5 p.m. to 10 p.m. When her students said the language training was too tough, Hwang gave them netbooks and encouraged them to download and watch American soap operas in their spare time.

Nine teachers in charge of the “study abroad” students worked until 10 p.m. three days a week.

The eight students said they tried not to fall behind their regular classes. They said they didn’t get any private tutoring and didn’t pay for any private lessons to take the SATs.

“I wanted to focus on my gift [in the vocational high school] rather than attending ordinary high schools and lagging behind,” said Mun Min-ju, who majored in cosmetology and will attend Pittsburg State.

Lee Seong-hyeon, who transferred from an ordinary high school two years ago, said, “I’ll never forget studying for the vocational certificate and getting up early to memorize English vocabulary.”

An orientation for the “study abroad” class was held at the school on Wednesday with roughly 100 parents and students participating.

Kim Na-hyeon gave a pep talk at the briefing.

“Believe you can do it [entering universities abroad],” she told the students and parents, “because we hold our victory to be self-evident.”