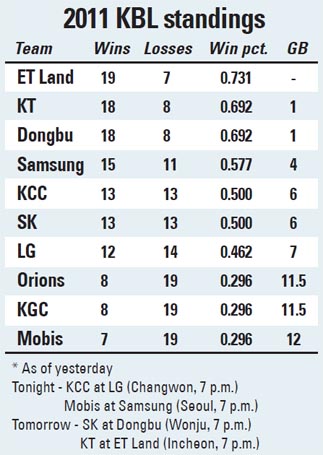 Kim Joo-sung and Hwang Jin-won clicked on and off the court during their days playing college basketball at Chung-Ang University.

The two friends, both hailing from South Gyeongsang, were separated for 10 years until Hwang signed with the Wonju Dongbu Promy in the offseason, allowing the two to compete on the same team KBL team for the first time.

“I feel like a load has been lifted off my shoulders with Jin-won joining our team this year,” said Kim. “I’m looking forward to strong play from the warm-hearted country boy.”

Kim first met Hwang in his freshman year at Chung-Ang. Hwang, from Masan, was a sophomore at the time. For the Busan-native, Kim found a lot of things in common with Hwang and the two became close friends.

“At the time, Joo-sung and I were both boorish,” Hwang said. “We were both country boys in a big city and we found a lot of things in common.”

They might not have been the most slick duo on campus, but on the court, they formed the most dangerous inside-outside combination in the country. Kim was a dominant force in the low post and Hwang provided support from the perimeter. With Kim and Hwang leading the way, Chung-Ang University dominated the collegiate scene.

But the end of their collegiate career separated the two. Hwang was drafted fifth overall in the 2001 KBL Amateur Draft by the Seoul Samsung Thunders. Kim was drafted first overall by the TG Sambo (currently Dongbu), the following year.

While Kim has played his entire nine-year professional career with Dongbu and has established himself as the top forward in the league, Hwang failed to settle with one team and became a journeyman, playing for a total of six teams over the span of 10 years. Dongbu is Hwang’s seventh team.

Now the two players are gelling again, just in the KBL.