Jung Woo-sung is one cool character, at work and in life

Jung Woo-sung is one cool character, at work and in life

Actor Jung Woo-sung takes a break on the set of “Athena” at the Dong-Ah Institute of Media and Arts in Anseong, Gyeonggi. By Cha Min-jeong

ANSEONG, Gyeonggi - Since his debut in the 1994 film “The Fox with Nine Tails,” Jung Woo-sung has made a career of playing strong, yet silent types with an air of melancholy. It’s a persona that has brought him success. He went on to create similar characters in “Beat” (1997) and “City of the Rising Sun” (1998) and later made his mark as the romantic lead in such films as “A Moment to Remember” (2004).

Now, at 37, Jung is a major star in the Korean Wave. Last year, he returned to Korean television for the first time in 14 years as the central character in the SBS drama “Athena: Goddess of War,” produced by Taewon Entertainment. The drama is a spinoff of the hit television series “Iris,” which had ratings of 35.9 percent when it aired at the end of 2009.

“Athena” centers on an influential terrorist organization of the same name, the National Anti-Terror Service and the conspiracies and power struggles that arise in both. Jung plays the main character Lee Jung-woo, an NTS agent who is secretly in love with a double agent.

Despite his soft-spoken on-screen persona, Jung actively speaks out on issues related to the entertainment industry.

This interview with the JoongAng Ilbo took place during the shooting of “Athena” at the Dong-Ah Institute of Media and Arts.

At a press conference earlier that day with the Ministry of Culture, Sports and Tourism, including Culture Minister Yoo In-chon, Jung encouraged the government to give greater support to television production companies, which are generally responsible for all aspects of production during a film shoot.

“While we are filming on location, our production crew is responsible for controlling the public, but if the police were to help out, as they do in other countries, the process would be much more efficient and effective,” Jung said.


Q. It sounds like you were criticizing the government for its lack of support for television dramas. Were you?

A. Korean television shows are popular these days, but it is also important to highlight the hidden side - the poor conditions we sometimes work in - at least to avoid accidents during filming.

Ko Hyun-jung (of the SBS series “Big Fish”) said recently that Korean television shows should just have one episode a week, and I agree. I regularly see actors and actresses on television who are completely worn out. Broadcasting stations and production companies should consider the production environment, not just the profits from a show.

It’s been 14 years since you last appeared on television, when you starred in MBC’s 1996 drama “1.5.” Are things different than they were back then?

I chose to do “Athena” mostly because it’s more like a movie than a television show. We began shooting six months ago so it doesn’t really feel like we’re doing television. But there has been pressure to do faster shoots, which reminds me that this is what television is like.

For me, the limit is generally one film a year, even though my fans don’t think it’s enough. But I had been searching for a television show for the last four or five years when this came along.

The show started off well with a rating of 22.8 percent for the first episode but by episode six the ratings fell to 18.6 percent. How would you compare the popularity of “Iris” to this show?

Viewers can compare my acting to that of Lee Byung-hun (who played Kim Hyeon-jun, the main character in “Iris”), but our characters are actually very different. From the beginning, “Iris” focused on the torment Kim Hyeon-jun felt in betraying his country and his colleagues. But my character, Lee Jung-woo, is a rookie who goes through a lot of suffering because of his unrequited love for Yoon Hye-in. At first, I thought that, as a NTS agent, my character would grasp things quickly and that he would be capable of dealing with tough situations - someone like 007. But when I got the script I was surprised. Honestly, I envy Lee Byung-hun a little at this point. I’m still waiting for my character to show himself. 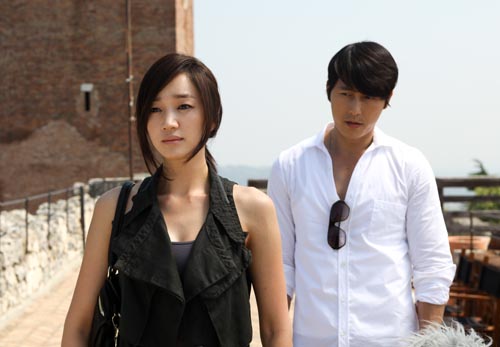 
The romance between Hye-in and Jung-woo began unfolding quickly in episode five.

So far, we’ve just presented a rough sketch of the rest of the series and alluded to an upcoming plot twist, so viewers were probably wondering when Jung-woo would start to play a bigger role. But you’ll see. First there’s bitter, then comes sweet.

You’ve never played a strong character or a bad boy. Jung-woo is also a laid-back character. Are you trying to keep that image?

I have been doing characters who are not exactly active but who have a strong desire to rebel against and escape from social norms. I prefer characters who have strong principles and are righteous.

After “Beat” was released, fans started telling me they had injured themselves when riding a motorcycle like I did in the movie or they smoked Marlboros just like the character did. They thought my character’s actions were cool and they copied them. Once, I was shooting in a back alley in Miryang, South Gyeongsang, and a group of young school kids saw me smoking and said, “Whoa, that’s cool!” I was so ashamed. Bad guy characters are provocative but they shouldn’t be portrayed as cool. Producers should think about how movies affect kids and the public - not only about profits.

Do you want to make your own films?

Sure. I’m always interested in producing and directing, and I’m getting ready. In doing that, I’m creating an environment where I’ll work in the future.

You are already in your late 30s. How has your age affected your career?

Male actors my age are lucky. In the past, when actors hit my age, they could only play older, married men. But these days, there are various roles men my age can play. I think that’s because the film industry has grown and because of the Korean Wave. But I do have to keep in shape so I don’t get behind the younger actors. I get a little chubby when I don’t work out. I guess I am getting older.