From left: “English Success Story of Park Kyung-lim,” “How to Revive Your Dead English” and “More Shameless Young-cheol English” Provided by the publisher and the JoongAng Ilbo


As demand for English-language study guides increases, more celebrity comedians are stepping into the growing market by creating guides based on their own experiences with language learning.

According to a report by Kyobo Bookstore, sales of English-language study guides have increased exponentially since 2003, when the bookstore started collecting related data.

Sales of English-language study guides now represent 0.6 percent of the store’s total sales, up from 0.4 percent in 2003.

In the books, the celebrities don’t give advice on grammar or sentence structure; instead, they provide inspiration by sharing their struggles with learning the language and offer advice on how to become comfortable speaking a foreign tongue.

One such book is by comedian Park Kyung-lim, who earned a degree at the New York Film Academy. Her book is one of the top 200 English-language learning books at Kyobo Bookstore, according to the store.

In “English Success Story of Park Kyung-lim,” published in 2004, the author writes, “I’m writing this book not because I’m good at English, but because I want to tell people who are scared of foreign languages that there is a way to overcome their fear.”

Another popular comedian with an English-language study book is Park Soo-hong, the host of the morning radio show “Good Morning Pops.” 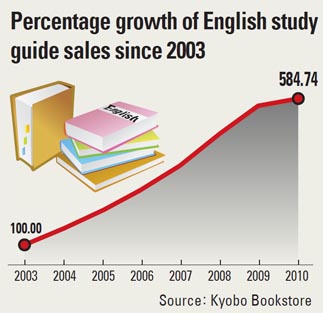 His book, “How to Revive Your Dead English,” published in 2009, emphasizes that learning and speaking English are two completely different processes.

When learning a new word or phrase, he urges people to first use the expression and then memorize it, which will remind the learner to use the word or phrase again.

Both books are also organized by various situations - one chapter is called “I’ve Got a Crush on Someone” - to help English learners become familiar with expressions for use in specific situations.

With anecdotal introductions and helpful hints throughout, the books have become especially popular among students like Hur Ji-young, 24.

“Celebrities’ books have expressions that I can use as soon as I step out of the bookstore, compared to other books that you actually need to sit down with and study,” she said.