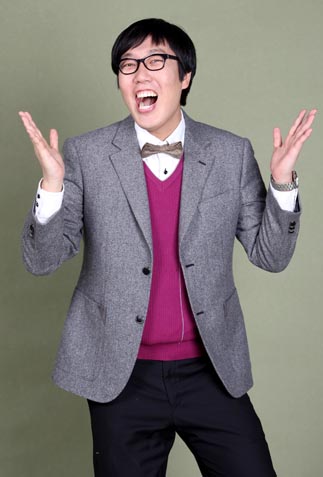 After comedian Kim Young-cheol appeared in a stand-up comedy competition in Toronto in 2003, he had an unexpected interview with an English-language media outlet in Korea when he returned home.

The reporter assumed that he would be fluent in English. But during the interview he got his tenses mixed up and became flustered trying to express himself.

“I had wanted to say that I went to Vancouver before visiting Toronto, but the tenses came out all wrong and I confused the reporter,” Kim said.

As soon as he came back to Korea, English became his obsession.

“I started studying on Sept. 1, 2003,” he said in a recent interview with the Korea JoongAng Daily, recalling the exact date of his first class. “Ten months later, I could understand things that were being said in English and I became more confident.”

He soon became as famous for his English skills as he was for his comedic talents. He was a guest on the Arirang Radio show “Beat” for a year in 2005, taught English at Kaywon High School of Arts for a year in 2006 and published two English study guides in 2007 and 2009. He has also appeared in a segment called “Young-cheol’s English” on MBC Radio’s program “Hopeful Songs at Noon” every day since 2005 and frequently gives lectures at universities around the nation.

This year, Kim will return to comedy, playing an English teacher in the sitcom “All My Love.”

In the interview, which took place on Dec. 16 at Bobby’s Burger, a friend’s restaurant that he helped name, he talked about what he did to learn English and offered advice to his fellow English language learners.


Q. What do you think is the best way to learn English?

A. Like a lot of other people, first I tried to read articles from The New York Times or listen to the news on CNN. But of course, I couldn’t understand a thing they were talking about. Then I had a chance to listen to Arirang Radio and something shocking happened. I was able to understand almost everything. It was so much easier for me to approach written and spoken news in English because it was based on names and events I already knew. For example, even when I’m listening to international news in Korean, if there’s a report about something in New York like a new law or a fire, I don’t always understand it perfectly, nor do I always care, because it doesn’t have an impact on my life.

So I would suggest that people who are eager to learn English utilize the English-language media within Korea. You will be surprised at how much you can understand.

Do people come to you when they need help with their English?

Many of my friends and the people I work with do come looking for me, especially when they need a catchy name for a new business.

One time, I also came up with a name for a bar called Eat, Drink and Run, based on the title of a grammar book I picked up when I was in the United States called “Eats, Shoots & Leaves.” “Run” is an interesting word to include in the name of a business, and it might make people wonder if they can run away without paying. I also think it’s easier for customers to remember if they can say, “Oh, that’s the bar with the interesting name.”

What has motivated you to keep studying English?

My motto is, “If you don’t ask, you don’t get it.” You just have to put yourself in new situations. If you don’t know something, that means that you haven’t asked anyone about the things you don’t know or haven’t tried to know what it is. When you go to an English language learning institute, your teacher can’t help you when you answer “Nothing much” to the question “What did you do last weekend?” Don’t be afraid of making a mistake and just spit out what you are thinking and what you would have said in your native language.
So are you never afraid of making mistakes? You’ve given numerous lectures and done many radio programs based on what you know about English.

I still don’t speak perfect English, and there are more things that I don’t know than I do know. Of course, I want to be a refined English speaker, but I think speaking English in a sophisticated way comes later, after you make hundreds and thousands of mistakes. As I said earlier, just spit out whatever comes to your mind first. Even native speakers sometimes make grammatical mistakes. They sometimes argue about when to use “a” or “the.”

Of course, it’s better not to make any mistakes, but who is going to blame you for making little mistakes? I’m not saying that you can be absolutely confident about being wrong, but you have to have a thick skin. If you make a mistake, someone will correct you and you will learn from that as well. When I’m teaching, if something comes up that I don’t know, I am willing to admit it. I tell them I’ll find the answer and get back to them in the next session.

Are you excited about your role as an English teacher in the sitcom “All My Love”?

Of course. It’s something I’ve been dreaming about. Now, people will know me as an English-speaking comedian. They give me the Korean version of the script and I translate it into English myself. And before the closing credits, we pick an expression we used during the sitcom and show it to the audience again. That way, everyone who watches can learn one expression per day.

How will you integrate your English skills with your career as a comedian?

What I want to do now is to study different accents. Some people only want to speak with a standard American English accent, but when we use English, we don’t choose who we are going to speak with. We sometimes have to talk with people with an Indian accent or an African accent or an East Asian accent.

That’s why I recently asked to have a teacher with a Filipino accent for my telephone English lesson every morning. I’d also like to do a show based on the different accents people have when speaking English. I think people who have had the same experience as I have will be able to sympathize with the show.