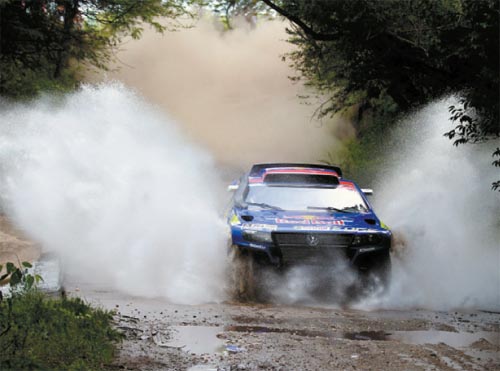 Volkswagen driver Mark Miller of the U.S crosses a dam during the first stage of the third South American edition of the Dakar Rally 2011 from Victoria to Cordoba on Sunday in Argentina. [REUTERS]

Sainz’s Volkswagen was 1 minute, 31 seconds ahead of second-place Stephane Peterhansel in a BMW and another 45 seconds in front of Volkswagen teammate Nasser Al Attiyah. American driver Mark Miller was fourth, 4 minutes, 17 seconds behind. Ruben Faria of Portugal took the stage in the bike category, clocking in at 1 hour, 58 minutes and 2 seconds. He was 29 seconds ahead of defending champion Cyril Despres and had more than a minute lead on Marc Coma, the 2009 champion. Sainz managed a stage victory without having a good day.

“For about 20 kilometers, we had a lot of rain,’’ he said. “At times we just could not see anything. Moreover, I had issues with the wipers that had stopped working. I am really happy the day is over. It was a bit like the Rally of Great Britain.’’

Faria also seemed surprised to have been a winner.

“I did better today than many great riders with different driving styles,’’ Faria said. “It’s already a good point of reference.’’

“It was a great warming-up exercise - a winding route, big sliding sections, a mix between skiing and riding,’’ Despres said. “I am in good shape. In the beginning of a Dakar, one always wonders: is this going to change much? Even if we tested our bikes, a Dakar will always be a Dakar. The race is on now and staying focused is of the essence.’’

Sunday’s first stage from Victoria to Corboda in northern Argentina followed the ceremonial ride from Buenos Aires to Victoria on the opening day. Officials said 407 contestants - competing in cars, motorbikes, quadbikes and trucks - started the race on Sunday, down from the 430 who were enrolled on Saturday.

The Dakar Rally is being held for the third straight year in Argentina and Chile. This year’s route covers 9,500 kilometers, reaching the Atacama desert in northern Chile - one of the driest places on earth - before heading back for the Jan. 16 finish in Buenos Aires. The second stage, which starts on Monday, will be held between Cordoba and San Miguel de Tucuman.