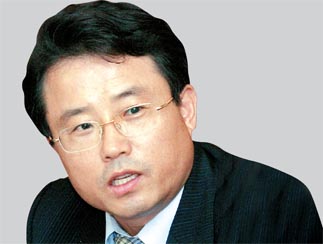 2010 has been an eventful year in the domestic finance sector. Since Kwon Hyouk-se stepped in as vice chairman of the Financial Services Commission in November, he has rarely had time to rest dealing with industry mergers and crises like management turmoil at some of the nation’s leading banks.

A. I believe foreigners and foreign credit-rating agencies view this risk as controllable.

The country is seeking to reimpose a withholding tax on bonds held by foreign investors and we recently made an announcement on the introduction of a bank levy.

I guess the local bond market has felt a little impact from these measures, but foreign investors are continuing to buy Korean shares and the stock market is doing fine. Foreigners injected nearly 40 trillion won ($34.8 billion) worth of capital in the local bond and stock market last year and this shows that they don’t seem to consider the North Korean risk very seriously. The domestic financial market is used to dealing with North Korean risks and every time we are faced with such incidents, the market has been able to recover at a rapid pace.

Since market fundamentals are very sound and the economic outlook for the country is pretty good, the risks posed by North Korea are not serious enough to change foreigners’ attitudes.

What was your most memorable achievement last year?

We’ve had a number of North Korea-related incidents, such as the North’s artillery attack on the Yeonpyeong Island and the sinking of the Cheonan warship.

There was also the fact that global finance conditions remain unstable due to uncertainties resulting from the European fiscal debt crisis and the lingering effects of the global financial crisis.

Despite such unfavorable conditions, the domestic finance market has maintained stability. And among the OECD member countries, Korea was able to recover from the global financial crisis at the fastest pace.

The foreign exchange market has also been stable. We were able to have such outcomes because local financial authorities were able counteract financial challenges through greater coordination and cooperation.

Financial markets remain sound, as shown by various economic indexes and market trends, such as the Kospi hitting the 2,000-point mark. This is due to cooperation among financial authorities.

Another achievement that I would like to point out is the growth of the microcredit loan business. The launch of a Korean version of microcredit loans has helped ease the deepening polarization of the economy.

What should Korea do in order to improve the country’s CEO governance structure?

Not only Shinhan, but also KB Financial Group faced related problems in this regard. The country’s CEO appointment procedures should be systemic and transparent like other advanced countries.

As we’ve witnessed with KB and Shinhan, we are still far behind in terms of setting up procedures or systems for CEO appointments.

In the case of Shinhan, its procedures were well established but it faced management problems. In the case of KB, the governance system in appointing the CEO was underdeveloped and it eventually faced this problem.

So, we need to improve the system for setting governance structures for financial firms.

There are some things that the government should do and that financial companies need to do. We are planning on submitting reform measures for governance structures of financial firms this year.

The sale of Woori Financial Group was recently suspended. What are the financial authorities’ future plans?

If we push ahead with the current sale procedures, the sale would not only face difficulties but would be a waste of time, as the Public Fund Oversight Committee said. So we judged that new sale measures need to be established after taking current conditions into account.

Suspending the sale now is a way to save time and to realize early privatization. The PFOC is seeking to proceed with the sale with more flexibility.

Will the new sale measures be introduced by mid-year?

We can’t be sure about the timing yet but it won’t probably take that long to come up with new sale strategies. It is not desirable to delay the sale indefinitely.

What improvement should be made to Korea’s M&A structure considering there has been so much controversy about the Hyundai Engineering & Construction deal?

Companies have already experienced the so-called winner’s curse when it came to the sale of Daewoo Engineering & Construction.

What’s regrettable about the M&A process is that bidding standards should have been considered before the sales were conducted.

Anyway, all decisions should be made according to principles and procedures by taking various factors - such as legal aspects - into account. In that respect, creditors should make decisions, and financial authorities have no right to comment on this matter.