Talks with North possible, but with conditions: Lee

Talks with North possible, but with conditions: Lee 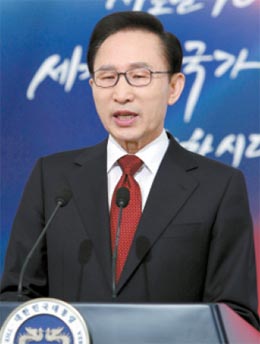 South Korea has not shut the door on dialogue with the North, President Lee Myung-bak said yesterday, and he urged Pyongyang to end its nuclear and military brinkmanship to take advantage of Seoul’s offer of powerful economic assistance.

In a 25-minute televised New Year’s address to the nation yesterday morning, Lee vowed to beef up South Korea’s military power and push forward defense reforms to bolster the country’s defense capabilities against attacks from the North.

Last year was the most violent year of military confrontation between the two Koreas since the 1953 cease-fire that ended the Korean War. The torpedoing of the warship Cheonan in March, which Pyongyang denies, and the shelling of Yeonpyeong Island in November killed South Korean servicemen and civilians.

“We cannot let North Korea covet even an inch of our territory,” Lee said. “Any provocation that would pose a threat to our lives and property will not be tolerated. Such provocations will be met with stern, strong responses. We must be equipped with a firm deterrence so that the North will not even contemplate another provocation.

“To this end, I will step up efforts for defense reform .?.?. We must not forget that the best possible security measure is a people united.”

Seoul will come up with policies for peace and unification, Lee said, backing his earlier position that South Korea will try to foster change among the North Korean people, rather than dealing with the North’s leadership.

“Taking it a step further, we need to make endeavors to engage our North Korean brethren in the long journey toward freedom and prosperity,” Lee said.

Warning North Korea that there will be nothing to gain from “military adventurism,” Lee also urged the international community to persuade Pyongyang to give up its nuclear arms programs. He, however, did not specifically mention the six-party nuclear disarmament talks.

“It is imperative now more than ever for countries concerned to play a fair and responsible role,” Lee said, referring to North Korea’s recent unveiling of a new uranium enrichment facility in Yongbyon.

“I remind the North that the path toward peace is still open. The door for dialogue is still open,” Lee said. “If the North exhibits sincerity, we have both the will and the plan to drastically enhance economic cooperation together with the international community.”

Lee’s remarks came amidst signals that Seoul and Pyongyang are looking for ways to restore their shattered relationship. In a New Year’s editorial, North Korean media expressed hope for inter-Korean dialogue and economic cooperation. The North also said tensions between the two Koreas should be defused as soon as possible.

Lee’s intention to seek a better relationship with North Korea has been hinted at since last month. He has stressed the importance of inter-Korean dialogue when the Ministry of Unification and the Ministry of Foreign Affairs and Trade briefed him on their agenda for 2011.

Conspicuously missing in Lee’s address, however, was what North Korea has to do to prove its seriousness and sincerity.

While giving up its nuclear weapons program is an obvious precondition, Hong Sang-pyo, senior secretary to the president for public affairs, said Seoul will now calmly wait for Pyongyang’s response to Lee’s proposal.

“The president made clear his intention for drastic economic cooperation,” Hong said, “if North Korea shows its seriousness for peace and cooperation through action, not words.”

Hong also said another key theme in Lee’s speech, in addition to national security, was the economy. “Improving the quality of life, having a vision to become a global Korea and giving hope to the young generation are the main messages,” Hong said.

During his speech, President Lee vowed his best efforts to achieve 5-percent growth this year and keep inflation below the 3 percent level. He also said 7.5 trillion won ($6.7 billion) will be spent to develop coastal areas of the country’s east, west and south.

He also said the goal for his government’s welfare policy is “to give people in need what they need,” and he warned citizens to be wary of politicians’ populist pledges.

“Indiscriminately dispensing financial benefits with a limited state budget to win the favor of the public is not a solution,” he said. “As many examples in other nations demonstrate, welfare populism results in budget crises, thus threatening the future of the nation as well as the welfare system itself. Giving financial aid to those who do not need any kind of help prevents such assistance flowing into the hands of those in desperate need, which does not fit the ideals espoused by a fair society.”

While Lee did not single out any specific case of welfare populism, the president appeared to criticize the Democratic Party’s programs including the latest move to provide free school lunches, while siding with former Grand National Party chairwoman Park Geun-hye’s latest proposal of a tailored welfare policy for the Korean people.

The GNP welcomed Lee’s address, saying he had presented a mature vision for his fourth year in office. But both liberal and conservative opposition parties said the message was insufficient to calm the people’s uneasiness over national security.

“It is meaningful that he has left the door open for peace and inter-Korean dialogue, but it’s not enough to calm the people,” Cha Young, spokeswoman for the Democratic Party, said. “Lee should present more specific plans to achieve peace on the peninsula.”