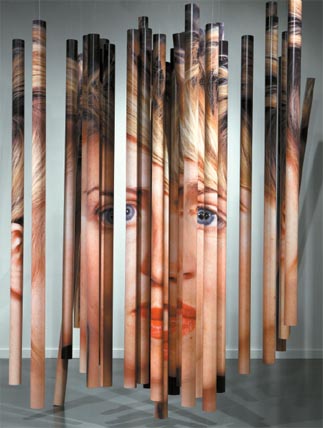 Kang Young-min’s “Hillerova’s Faces” (2008) is part of the “Chasm in Images“ show at the Seoul Museum of Art. Provided by the museum

In a small black box on the first floor of the Seoul Museum of Art, which is holding an exhibition called “Chasm in Images,” viewers may feel like they are in a horror movie. White screens installed here and there seem to bulge with vague human shapes, as if someone were hiding behind each of them. But no one is there, and a closer look reveals that the images are actually just video projections. The creepy feeling that somebody was hiding behind the screens was created by an optical illusion.

In this way, the work by emerging artist Kang Yi-yun, titled “In Between 03,” creates the sense of disorientation by playing with the gap between the real and the virtual. To some viewers, the sensation may evoke a feeling of terror; to others, it is tantalizing.

SMA’s exhibition features works by Kang and 18 other emerging artists who, like Kang, explore the art of the illusion.

“In today’s society, which is dominated by images, everyone has had the experience of perceiving an image as reality through its continuous reproduction,” the museum said in a press release.

“While able to sense the gap between what we see and what we know, between images and reality, we live without appreciating this. This show intends to examine aspects of contemporary art that will make viewers aware of this gap.”

The museum said it chose the participating artists from among the artists it supports through the Nanji Art Studio residency program and other programs.

The section “Part 1, The Strange Mirror” has a broad appeal, and may even be interesting for those who are not big fans of contemporary art. The humorous optical illusions - including “Snubby,” a kinetic three-dimensional reversible figure by Kim Ki-hoon - easily pull the viewer in but are also open to interpretation on a deeper level.

Another work in this section is the installation “Hillerova’s Faces” by Kang Young-min, which consists of deconstructed images of a human face reassembled in odd combinations.

The section “Part 2, Treachery of Images” features works with a social and political bent, including Keum Hye-Won’s photography series “Blue Afternoon,” which shows illusions of redevelopment projects in capitalist society.