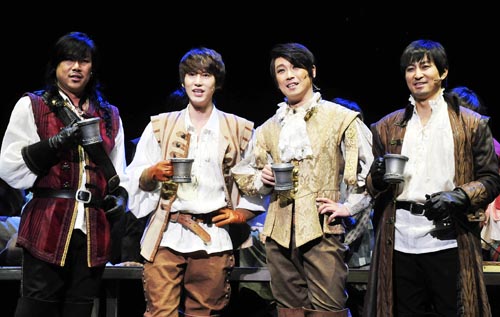 The Korean version of “The Three Musketeers” will be presented in Seoul at Chungmu Art Hall’s Grand Theater through the end of the month. See THEATER, below. [NEWSIS]

Tomorrow: Start off the new year by listening to a classical music concert by the Seoul Philharmonic Orchestra and cellist Yang Sung-won. Together, they will play Dvorak’s Cello Concerto in B minor, Op. 104, and Symphony No. 9 in E minor, Op. 95, “From the New World.” Chung Myung-whun conducts.

Sunday: Ryuichi Sakamoto returns for his first appearance in Korea since 2000. The concert features two pianos - Sakamoto will play one and the other piano will play recordings of Sakamoto’s songs.

The concert features songs from Sakamoto’s recent albums “Playing the Piano” and “Out of Noise,” both from 2009.

Jan. 11: Paul Potts, a loner turned star singer, and Kevin Kern, a blind pianist, are artists who overcame obstacles to become world stars. Through this concert, they aim to give the gift of hope to disabled and low-income children.

Soprano Yisabel will appear as a guest.

The program includes “Love Story,” “What a Wonderful World” and “Moon River.”

He will be performing worldwide favorites from his days with The Police, including “Every Little Thing She Does is Magic,” “Roxanne” and “Every Breath You Take,” as well as hit songs from his solo career, such as “Englishman in New York,” “If I Ever Lose My Faith in You” and “Fields of Gold.” He will be joined by the Korean Symphony Orchestra, led by conductor Steven Mercurio, who has conducted concerts for classical musicians like Andrea Bocelli and the late Luciano Pavarotti.

To Jan. 15: The legendary 72-year-old guitarist, known in Korea as the godfather of rock, presents a month of concerts. He chose Daehangno Small Theater because it was where he performed in 1960 at the height of his career.

This concert includes songs from the soundtrack of Takeshi Kitano’s film “Kikujiro” (1999).

He will be accompanied by the Korean Symphony Orchestra.

Jan. 20: Start the new year with the Vienna Strauss Festival Orchestra, conducted by Willy Buchler. The orchestra was founded by Johann Strauss specialist Peter Guth 30 years ago and is known for its authentic interpretations of Strauss’ music. The program includes “Die Fledermaus,” “Champagner Polka” and “Russischer Marsch,” Op. 426.

Jan. 27: The Korean Chamber Orchestra and Busan Boys Orchestra start off the New Year with a performance of works by Strauss, Brahms, Beethoven and more. The program includes Strauss’ “Die Fledermaus” overture; Brahms’ “Hungarian Dance No. 5”; Beethoven’s “Triple Concerto for Piano, Violin and Cello,” Op. 56; and Piazzolla’s “Four Seasons: Winter and Summer”; and Dvorak’s Symphony No. 9 in E minor “From the New World.”

To Jan. 30: The legendary story of the three musketeers Athos, Porthos and Aramis returns to Korea, following sold-out houses the last time it was presented here.

To Feb. 27: Based on the movie of the same name, and with music by Elton John, this musical has been a mega-hit worldwide. This is the first non-English language production of the show, which was previously produced in Britain, Australia and the United States. Four men will alternate in the title role, including Im Sun-woo, who is the youngest person ever to play the character. It was nominated in 15 categories at the 2009 Tony Awards and ended up winning 10 of the major awards, including best musical.

To March 27: Aida returns to Korea after a five-year absence. The story of Ethiopian princess Aida is one of forbidden love. Aida is captured and sold into slavery in Egypt, where Egyptian military commander Radames falls in love with her. As the military commander of Egypt, Radames is forbidden to love a woman from a different country and he struggles to choose between her and his service to the Pharaoh. To make matters worse, the Pharaoh’s daughter Amneris is in love with him. Will Radames chose love or success?

To Jan. 17: Gigantic Christmas trees and a variety of lights will decorate the streets of downtown Busan at night until Jan. 17. About 90 trees have been installed along a one-kilometer section from the entrance of Gwangbokro to Chamseon Samgeori. The facades of large buildings are also decorated with Christmas trees.

To Feb. 6: Boseong, some 400 kilometers south of Seoul, is one of the major tea production areas in South Korea. Installations include large Christmas trees, illuminations and a tunnel of light called the “Milky Way Tunnel of Love.” These installations follow the paths of green tea plantations to offer fantastic night views.

Saturday to Jan. 31: Pyeongchang is a haven for winter sports thanks to an abundance of snowfall. Try ice fishing, sledding, 4-wheel ATV riding, snow rafting and traditional folk games. Any trout caught while ice fishing and lure fishing can be prepared right away at a nearby restaurant.

Saturday to Jan. 30: Enjoy fishing for mountain trout under the thick ice of Hwacheon Stream, the source of the North Han River. Catch trout with your bare hands, compete in a sled race, play football on the ice or try bobsledding. There is also an exhibition of ice sculptures that took 20 weeks to prepare. Samples of raw and grilled mountain trout are also available.