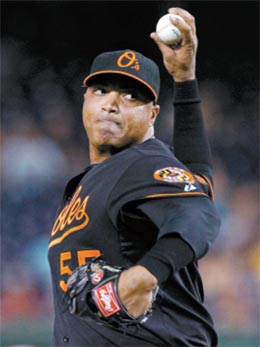 SANTO DOMINGO, Dominican Republic - Baltimore Orioles reliever Alfredo Simon surrendered to police Monday to face an involuntary manslaughter charge in a fatal shooting on New Year’s Eve, and a judge ruled he could be held up to a year pending trial.

Judge Adriana Vazquez Jimenez issued the order in Puerto Plata on Monday evening, several hours after Simon gave himself up. The Dominican pitcher is suspected of firing a shot that killed 25-year-old Michel Castillo Almonte and wounded his 17-year-old brother in the northeast coastal town of Luperon. The dead man is Simon’s cousin, according to the player’s lawyer, who has said the player was firing celebratory shots in the air.

Police initially said a murder charge would be filed against Simon, but Victor Mueses, a public prosecutor, told The Associated Press on Monday that witness accounts and evidence supported an involuntary manslaughter charge instead.

“The version that we have is that there was a dispute between two women and he tried to dissolve it, fired a shot that ended up wounding a young person in the arm and that same bullet lodged in the chest of the deceased,” Mueses said by phone.

Simon could face up to two years in prison if convicted of involuntary manslaughter. Mueses initially said he would request three months of preventive detention for Simon while the case is pending, but later pushed for a year.

Simon’s lawyer, Carlos Olivares, told The A.P. that he planned a quick appeal of the ruling. He said his client is not a flight risk and called the ruling an unjust decision. The Caribbean country’s legal system allows for preventative detention. Human rights groups have long said the provision is abused and thousands of people are held unjustly for extended periods.

Earlier Monday, Olivares said his client fired random shots with a group of local boys to celebrate New Year’s Eve. But he believes Simon could not have been the shooter because the player’s cousin was shot in the chest.

“We are giving the weapon so that the national police can do the pertinent ballistics tests,” Olivares said.

The ballistics test should be completed in the next 48 hours, said Jose Polanco, a Dominican police chief.

Some Dominicans shoot guns in the air on New Year’s Eve, especially in the hours leading to midnight, although authorities have repeatedly warned against the practice. Bystanders are killed or wounded every New Year’s Eve.

Simon was accompanied to the police station by Julio Lugo, the free agent second baseman for the Orioles.

“He is scared because he recognizes that he fired shots, although they went into the air,” said Lugo, who advised Simon to surrender after he fled the scene.

The injured teenager was shot in the right arm and remains hospitalized in the Dominican city of Santiago.

The Baltimore Sun newspaper said that John Stockstill, the Orioles’ director of development, was being sent to the Dominican Republic to evaluate the situation.