If at first you don’t succeed, try, try again

If at first you don’t succeed, try, try again 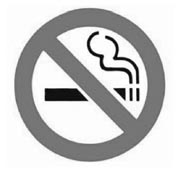 If someone were to puff on 30 cigarettes a day for 30 years, the individual would smoke 328,500 cigarettes into thin air. Scientists say that the chances of contracting cancer increase exponentially after smoking more than 300,000 cigarettes. About 30 to 40 percent of cancers are caused by cigarette smoking. There is extensive research saying that smoking is hazardous to your health. Nevertheless, more than 1 billion people in the world are smokers. But why? Is it because they are unaware of the danger? Quite the opposite, I’m afraid. Anyone who smokes recognizes the signals their body sends out. The moment they light up and inhale, they can feel the poisonous elements spreading into their body.

The dangers of smoking are nothing new. Clergymen in the 16th century called tobacco the “leaf of the Devil” and believed that a toxic substance that gives comfort and consolation disturbed the mind. The poisonous effects of smoking were proven in the early 19th century through an experiment in which a mouse injected with nicotine died. At the time, researchers predicted that the 20th century would be the non-smoking century. Boy were they wrong, proving that knowing the poisonous effects of smoking is one thing and stopping a potentially deadly habit is another.

In his book, “Cigarettes Are Sublime,” Richard Klein, a professor at Cornell University, hypothesized that if smoking cigarettes was good for your health, almost no one would smoke. He believed that smoking, which only causes disease and pain, represented the beauty of darkness, leading people to indulge. Others have praised smoking. Korean poet Gongcho Oh Sang-sun, who was known for his love of smoking, even wrote that “poems, cigarettes and I form a trinity that sings the same tune with a different voice.”

Nowadays, more people are trying to quit smoking. Last year, the rate of smokers among male adults in Korea was 39.6 percent, almost half of what it was 10 years ago.

At this time of year, many smokers have made resolutions to quit. Most of them will only last a few days before pulling out another cigarette. But if you are one of these dear people, don’t blame your lack of willpower too much. Smoking is an element of culture that has lasted for more than 400 years. It is not something that will disappear overnight. And if you fail to quit, you can always try again.