For Kim, a year of lots of photo ops

For Kim, a year of lots of photo ops 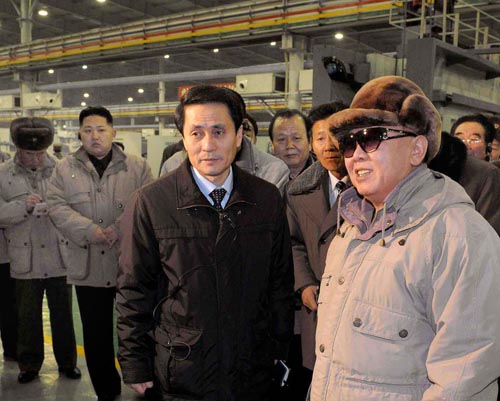 North Korean leader Kim Jong-il inspects a machine plant in Huichon, North Korea, in this undated photo released on Dec. 22 by the Korean Central News Agency via the Korea News Service in Tokyo. Kim was accompanied by his son and heir Kim Jong-un, second from left. [AP/YONHAP]


The world saw the most of Kim Jong-il last year since he became leader of North Korea in 1994 after the death of his father, Kim Il Sung, the South Korean Ministry of Unification said in a report yesterday.

Kim’s field trips and public appearances, lauded by the North’s media, peaked in 2010 at 161.

Kim’s son, Kim Jong-un, accompanied his father 33 times last year, while he was also reported to have made five public appearances on his own.

The North Korean leader made most of his visits to places linked to the state’s economy, such as factories and farms, trying to show that the North has been boosting production to meet its goal of becoming a “strong and prosperous country” by 2012.

Kim Jong-il made 63 visits to facilities related to production and the economy compared to 38 visits to military bases.

A similar pattern of putting emphasis on economic development was also seen in 2009, when Kim made 65 stops at production facilities, while visiting 44 military-related facilities.

One significant change that was observed from last year’s appearances is Kim Jong-il’s reliance on family during visits. Jang Song-thaek, Kim’s brother-in-law, and Kim Kyong-hui, Jang’s wife and Kim’s sister, ranked first and second, respectively, in appearances with the leader.

Jang, vice chairman of North Korea’s National Defense Commission and often called the No. 2 man in the country, accompanied Kim 114 times. Kim Kyong-hui, whose presence was significantly boosted last year, was seen with the leader 111 times, from a mere 16 in 2009.

The North Korean leader’s trust appears to have shifted since 2009 from high-ranking officials to family members. This has especially been seen since Kim Jong-un’s ascension in September to the rank of general.