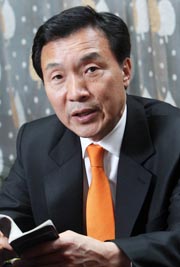 Democratic Party Chairman Sohn Hak-kyu said yesterday he was confident his party would win the 2012 presidential election in an interview marking the 100th day of his leadership of the largest opposition party, and downplayed the popularity of his political rival, the Grand National Party’s Park Geun-hye.

Sohn, the 63-year-old former Gyeonggi governor, has never been shy about his presidential ambitions. He left the GNP to join the DP in March 2007 to protest the party’s presidential primary process but failed to become the liberal party’s presidential candidate. He went on to win the DP chairmanship in 2008 and was reelected to the post once again on Oct. 3, 2010.

His first pledge was to recapture the presidency for his party.

Sohn reiterated his presidential aspirations in an interview with the JoongAng Ilbo after attending a meeting with residents of Bucheon, Gyeonggi. The Democratic Party began Monday a 100-day-long campaign called “Grand Voyage for Hope” to rouse the public to its cause, and Bucheon was the event’s starting point. After the meeting ended around 11 p.m. Monday, Sohn sat down with the JoongAng Ilbo.

Perhaps in his first direct challenge to Park, Sohn said he is not intimidated by Park’s soaring popularity. “I don’t have any special worry about the figures,” Sohn said. “Polls are not a real election, and the actual election outcome will be different. I won’t be a losing candidate. Why would I be here if I don’t have the belief in winning?

“Park’s victory [in the election] would signify that we are going back to the old, obsolete system,” Sohn said. “No matter how hard she tries with her welfare agenda, she won’t be able to escape the aura of [her father] Park Chung Hee.”

In latest opinion polls, Park ranks at the top of potential presidents candidates, with possible opposition party candidates trailing far behind her. In a poll released by MBC on Dec. 27, Park was backed by 42.3 percent of respondents, while Sohn was supported by 5.8 percent.

Sohn maintained the DP will prevail in the next election because its agenda and vision are more compatible with the spirit of the times than those of the Grand Nationals.

“A presidential election is about the Zeitgeist, not strategy,” he said. “Park’s high popularity should be seen as an extension of Lee Myung-bak’s presidential victory. If the trend continues, I guess there is no other way, but Park and Lee both admitted the importance of welfare policy and peace and dialogue between the two Koreas. That’s the Zeitgeist, and those desiring peace and welfare will join the Democratic Party in time for the presidential election.”

During the interview, Sohn also made evident his anger toward President Lee. “I expected Lee to express regret during his New Year’s address for having railroaded bills at the National Assembly,” Sohn said. “He is brazen for having failed to do so.”

He also said the Democrats will grill Lee’s appointees for ministerial posts at the confirmation hearings. Lee named six minister-level nominees on Friday, and Sohn singled out his hostility toward Chung Dong-ki, the nominee to head the Board of Audit and Inspection.

“Lee’s appointment of Chung, who served as senior secretary to the president for civil affairs, is a challenge to democracy and constitution,” Sohn said. “The Board of Audit and Inspection is an independent institution. How dare Lee appoint his civil affairs aide to such a position?”

“How can Lee appoint him to the post, while talking about the division of power?”

Asked about his leaning to the left since he became the DP chairman, Sohn said current political conditions have forced him to move from a liberal centrist position.

“If you see the Korea-U.S. FTA, the original version was somewhat balanced, but the revised one was nothing more than a concession to the U.S. demands,” he said. “It’s wrong to say that I should support it because I had supported the first version.”

Sohn said his role as DP chairman is different from his roles in the past.

Sohn said he won’t try to commandeer the party like other opposition leaders such as former president Kim Dae-jung.

“My role is not to put myself first, but to boost the party’s ability,” he said.