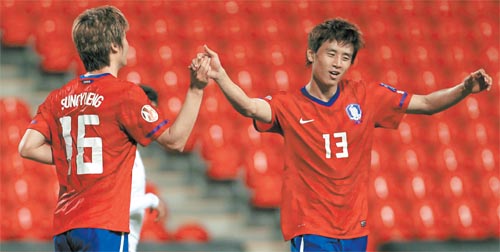 Ki Sung-yeung, left, celebrates with Koo Ja-cheol after scoring on a penalty kick in the 38th minute of their 2-0 friendly-match win over Al Jazira of the U.A.E. Football League on Tuesday. By Lim Hyun-dong

Cho used U-23 national team captain Koo Ja-cheol as a forward in a friendly against Al Jazira of the U.A.E. Football League on Tuesday and saw good results for his team. Koo played the first half and helped Korea to a 2-0 win in its final friendly ahead of the 2011 Asian Cup.

“[Koo] exceeded my expectations today and played well,” said Cho. “I will need to check some other aspects of the team, but it will not be bad for us to stick to the same strategy in the Asian Cup opener against Bahrain.”

As the secondary forward, Koo was the link between the defensive midfielders and the offense. Cho had tested captain Park Ji-sung in the same role with Kim Shin-wook at forward in a 1-0 international friendly win over Syria on Dec. 30, but the experiment proved to be a failure.

In contrast to the sluggish play in the first half of the friendly against Syria, Korea’s offense showed a lot of movement and set the pace of the game with Koo in the middle and Park Ji-sung and Lee Chung-yong flanking the wing positions. Defensive midfielder Ki Sung-yeung and forward Ji Dong-won also played well in their respective roles.

“With quality players like Ji-sung to my left and Chung-yong to my right, we were able to create many good plays,” said Koo. “Son Heung-min also played well in the game. I think if Heung-min and I were to play defensive midfield, we could be playmakers and produce many good passes.

“I am not competing in the Asian Cup with individual goals, but rather for my country. I have a clear goal in mind.”

On Tuesday, Lee Chung-yong scored the opening goal on a cross from veteran left fullback Lee Young-pyo in the 35th minute and was able to draw a penalty in the 38th minute because of a sharp pass from Koo. Ki scored on the resulting penalty kick.

“Ja-cheol played exceptionally well today,” said Lee Chung-yong. “He communicated well with the players on defense. I think with Ja-cheol in the lineup, we can be more creative on offense.”

On defense, Cho shuffled his line by using central defender Cho Yong-hyung as his right fullback in the first half.

“At this point, our fullbacks are not in their top physical condition,” said Cho. “It was a temporary role for Cho, but I don’t think it will be bad to use Yong-hyung as a fullback in future games against bigger teams like Australia.”

Cho has the freedom of choice to shift Cho Young-hyung to the fullback position because he has several central defenders capable of starting for the national team.

“Lee Jung-soo, Kwak Tae-hwi, Hwang Jae-won and Hong Jeong-ho are some of the players on our roster,” said Cho. “Lee Jung-soo and Kwak Tae-hwi are both quick players, but Lee knows Middle Eastern football well and Kwak is a strong, physical player.”

With the opening match against Bahrain on Jan. 10 fast approaching, Cho said he has settled on his starting lineup except for one or two players.

“We are now at a stage where we need to fine tune our tactics,” said Cho. “We just don’t have a lot of time to make too many changes to our starting 11.”