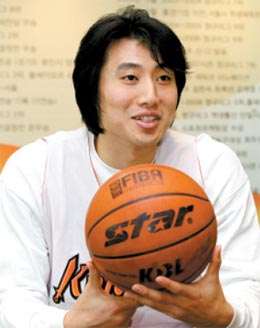 It looks like it could be some time before Bang Sung-yoon of the Seoul SK Knights shakes off the rust from an extended stay on the bench because of an injury.

The 29-year-old forward hadn’t played in a KBL game since March 7, 2010 until a New Year’s Day tilt against the Incheon ET Land Elephants because of a right foot injury that kept Bang courtside for close to 300 days. The sharpshooting forward was off target in 12 minutes of play in the team’s 91-72 loss to the Elephants. He failed to score a point.

“I just can’t figure out what the problem is,” said Bang after a recent practice in Yongin, Gyeonggi.

Bang was once the most sought after prospect in the country but has failed to live up to expectations. During his collegiate days with the Yonsei University basketball program, Bang was considered by many experts to have the combination of Hur Jae’s shooting touch, with the finesse and power of Hyun Joo-hyup - both considered legends in Korean basketball.

Bang’s future looked so bright at one point that he even attempted to become the first Korean to play in the NBA. And in the past, Bang had stints in the NBA Developmental League with the Anaheim Arsenal and the Roanoke Dazzle.

Bang was drafted first overall in the 2005 Amateur Draft by the Busan KTF Magic Wings and won Rookie of the Year that season, but has yet to play an entire 54-game season in the KBL.

“I didn’t have any problems with the Knights,” said Bang. “But I was getting injured every year and it got to a point where I wondered whether I was just destined to play for another team.”

When Bang reached free agency status at the end of last season, the Knights offered him a lucrative contract worth 520 million won ($462,800) per season. However, Bang turned down the offer because he wanted to start fresh with another club.

But no team showed interest in signing the injury-prone forward with a hefty price tag.

In the meantime, the Knights signed free agent Kim Hyo-bum from the championship winning Ulsan Mobis Pheobus. Bang had no choice but to return to the Knights at a discounted four-year deal of 130 million won per season.

His most recent run-in with injury trouble has been frustrating for Bang and the team.

“Aside from the injuries, it was a painful experience for me,” said Bang.

Bang’s recovery from a foot injury took longer than expected and he wasn’t able to consistently play this season.

“I would understand if Bang got injured during a physical play but he sustained his latest injury on his own when he was not in top physical condition,” said Knights head coach Shin Sun-woo.

Said Bang: “I have no excuses. When the pain got worse on opening day and I was sidelined again, I started to think whether it was time for me to step away from basketball. It seems like I’ve always suffered injuries. Others don’t understand the pain I’ve been through.”

The Knights have managed a record of 13-13, good enough for sixth place in the 10-team KBL, but have a tough schedule ahead with games against the top-three teams in the league. The Knights played the Wonju Dongbu Promy last night and now face ET Land again on Saturday and the Busan KT Sonicboom on Sunday.

Bang is still suffering from slight pain in his right ankle, but says he is focused on becoming a contributing factor for the Knights this season.

“Our team will not undergo drastic change with my return,” said Bang. “But it is my thinking that I need to at least be a positive force among my teammates.”