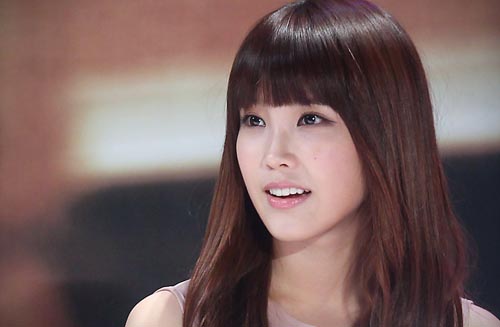 Last year, Singer IU, 17, was hailed as the most successful teenage solo singer of the year. Culture and music critics say her appeal stems from the public’s frustration with cookie-cutter idol singers. [YONHAP]


Teen singer IU had a hard time making it in Korea’s ultracompetitive music industry. She is not a picture-perfect beauty. She isn’t backed by any of the nation’s three major entertainment agencies. She was rejected more than 20 times at auditions. Her first album was released in September 2008, but it was a flop.

Yet the 17-year-old singer continued to pursue a singing career.

Last year, her persistence paid off. She received critical acclaim and commercial success as well as awards from SBS’s Entertainment Awards, the Golden Disc Awards and others.

She recently followed that up with a new hit song - “Good Day” - from her third “mini-album” “Real IU,” released early last month. The upbeat song, which requires a three-octave range, put the doe-eyed singer at No. 1 on all three of the nation’s major music shows in the second weekend of December, as well as music charts on cable channels.

Critics have said that IU’s success stems in part from the public’s frustration with mass-produced idols, and the legion of fans following her seems to indicate they are right.

During a recent interview with Ilgan Sports, the singer, whose offbeat stage name is a combination of “I” and “you,” proved herself to be a mature and thoughtful young woman who appreciates the efforts of her staff and the adoration of her fans.


Q. Some people probably think you became a star overnight, but it’s already been three years since your debut.

A. I think I’ve been climbing up the ladder little by little over the years. My first album failed, but I’m grateful for that. If I had become successful as soon as I made my debut, I wouldn’t appreciate my staff members and the popularity that I’m enjoying now.

The people around me have helped me make my album and given me advice on clothing, but in the end, I’m the only one standing in the spotlight.

You’re a high school sophomore but you’re doing all of these music shows, TV dramas and reality shows. How do you juggle celebrity life and student life?

I try to go to school every day, but when I have to do a shoot for a reality show, which takes at least two days on location, I can’t always make it.

Does being a star affect your school life?

My friends really don’t see me as a celebrity because it’s already been three years since I started working in this business.

Have you decided what you will major in when you go to college?

I haven’t made up my mind yet, but I want to learn more about Korean literature because I’m interested in writing.

Ever since I made my debut, my grades have dropped a lot, except my grades in Korean literature.

There are rumors that you’ve had cosmetic surgery. How would you respond to that?

I know. They say I’ve done something to my eyes. I saw an old audition clip of myself that was circulated on the Web, and I was even surprised at myself because I look really different than I do now. (Laughs.)

I haven’t had plastic surgery, but my secret is perfect makeup. In addition, I used to weigh around 48 kilograms (105 pounds), but I lost five kilograms recently because I sleep for only four hours a day and that makes me look different.

A recent article about your income became the talk of the town. (The article said IU earned 5 billion won, or $4.4 million, last year alone.) Who manages your income?

My mother. She gives me an allowance but actually I don’t even have time to spend it.

How do you feel when you receive compliments on your singing ability?

I feel flattered, but I know I have a long way to go. I don’t have that much experience in life, and I know I’m not as good at singing sad songs as more seasoned signers are.

I’ve dreamed of being a singer all my life and now I’m doing it. I couldn’t be happier.