Film critic puts his reputation on the line in directing debut

Film critic puts his reputation on the line in directing debut 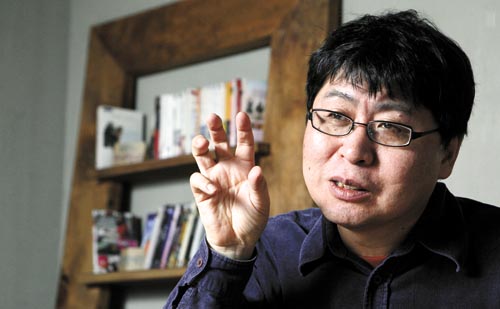 Film critic-turned-director Jung Sung-il talks to the Korea JoongAng Daily in a cafe in Apgujeong-dong, southern Seoul. By Jeon Min-kyu


Long before the democratizing forces of the Internet made pundits of us all, Jung Sung-il made the case of film as high art and changed how a generation of Koreans viewed movies.

It has been more than two decades since Jung - one of Korea’s most influential film critics - started writing comprehensive reviews for the nation’s first specialized film magazines, Roadshow and KINO. Last month, cinema’s intellectual spectator finally became a participant himself, making his directorial debut with the epic three-hour and 18-minute “Cafe Noir.”

On his recent foray into directing, Jung, like a true critic, was the first to admit his failings as an auteur. “After finishing ‘Cafe Noir,’ I realized that the great artistic works of our time have something beyond the man-made factor - that they have a sacred quality about them that can’t be replicated,” he said during an interview with the Korea JoongAng Daily.

As his brown eyes peered up intently from a pair of black-rimmed glasses, the 51-year-old spoke about films with the innocent zeal of a schoolboy. “I tried to replicate a scene from one of [French photographer Henri Cartier-]Bresson’s works for my movie - a shot of a hand holding a cup. Even though I shot it in the exact same manner as him, it was like, you could see God in his work but not in mine!” he laughed, putting his head in his hands. 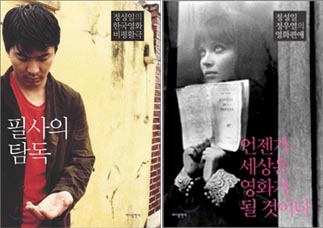 Despite Jung’s self-critique, “Cafe Noir” has garnered positive reviews from a majority of his successors in Korea’s booming world of film criticism. Last year, the film was invited to screen at the prestigious Venice International Film Festival.

The two-part movie is based on two classic, literary texts - Goethe’s “The Sorrows of Young Werther” and Dostoyevsky’s “White Nights.” It follows Yeong-su (played by Shin Ha-gyeun), a middle school music teacher, as he laments the end of his illicit affair with a married woman, Mi-yeon (Moon Jung-hee). In the movie’s second half, he finds spiritual solace in Sun-hwa, who he encounters while walking around Cheonggye Stream in central Seoul.

More striking than the significance of the plot, however, is the film’s poetic mise-en-scene, in which the camera brings out Seoul’s esoteric beauty. In particular, black-and-white takes of Yeong-su and Sun-hwa running along Cheonggye Stream under dimming city lights feel like lyrical odes to Seoul, bringing together Seoul’s modern day disfigurements and complexities.

“Some say that I am supercilious for taking on old, literary texts to make a commercial movie. But I want to retaliate by saying that great movies are as influential, if not more, as any classic literature or fine art,” he said.

“Well-made movies speak to the modern experience, in ways that no other form of art can. With our rich history of cinema today, it would be ignorant and highly untrue to say that the sole purpose of a movie is generic entertainment.” 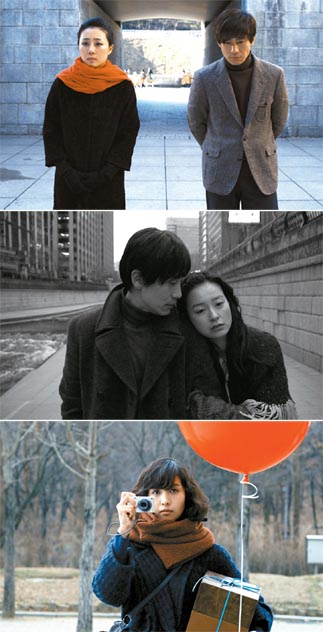 Stills from Jung Sung-il’s movie “Cafe Noir”: (from top) Yeong-su and Mi-yeon contemplate their affair; Yeong-su and Sun-hwa walk along Cheonggye Stream in central Seoul; Mi-yeon goes to a zoo by herself. [JoongAng Ilbo and Sponge Entertainment]

In a way, Jung says his adoration for films started as a form of rebellion against this very view of films in Korea when he was growing up. The critic-turned-director revealed that his father has never been supportive of his career in the film industry.

“I remember, when I was in my late 30s, I visited my parents on New Year’s Day. My father asked me what I do to earn money these days and I said, ‘I am chief editor of a film magazine.’ After a brief pause, he said, ‘So when are you really going to start working?” he chuckled loudly.

“He still thinks of me as a sort of good-for-nothing bum!”

For the young cinephile, however, his father’s disapproval was the least of his problems. When Jung was growing up during the 1970s, watching foreign art house films was a nearly impossible task here.

“The first film I remember seeing in a theater was ‘Lawrence of Arabia’ when I was still in elementary school. The movie was stuck in my mind for a long time afterwards. My mother says that after seeing that film, I would do nothing but sit in my room and draw deserts and camels,” he recalled.

After hearing about the French film “Forbidden Games” by director Rene Clement on the radio, Jung says the thought of not being able to see the movie haunted him for months. Then one day he saw a small ad in a newspaper saying that the French Culture Center was playing the film.

As luck would have it, by the time 15-year-old Jung had rushed to the French Culture Center, the film had already ended. He instead watched “The Riflemen” by Jean-Luc Godard - a film Jung credits for forever changing his perspective on films.

“That film was so shocking. I’d never seen anything remotely similar to that movie. I had no prior knowledge of the movie or Godard, and I think watching the movie in this unprepared state added to the shock,” he said.

Jung added that he remembers visiting the French Culture Center as if it were his job.

Despite wanting to become a film director, harsh realities after college took Jung on another path. After graduating from Sungkyunkwan University’s school of journalism, Jung took a job penning movie reviews at Mal, a culture magazine that means “talk” in Korean.

“At that time, if you can believe it, print media paid more than a lot of conglomerate jobs. I needed to earn money, and I just couldn’t afford a low-paying job as an apprentice to a director or something,” he said.

After his reviews had earned him respect in the local film community within a few years, he became chief editor of KINO, a film magazine. During his eight-year stint there from 1995-2003, Jung and his staff helped take professional film criticism in Korea to another level, incorporating modern philosophical theories and knowledge of world cinema into film reviews. Above all, it was KINO that first argued that film was worthy enough of an art form to dedicate sustained thought and argument.

He says that one of the most frequent questions he got from readers when KINO started out was “what is this ‘mise-en-scene’ you writers keep referring to?” followed by complaints that the magazine was alienating ‘regular’ moviegoers with difficult, foreign words and complicated reviews.

“Nowadays, mise-en-scene in Korea has become a common term. I mean, there is even a shampoo that’s named mise-en-scene!

“I detest star-based ratings and things like that for film reviews. We [at KINO] weren’t trying to use fancy language just for the sake of it. I don’t think you do justice to an important film [as a critic] without some background knowledge of contemporary culture, art and how the director sees the world.”

There have been films and directors that stir Jung’s passions to this day - in good ways and bad. During the interview, he made fun of films that “worry about the future of the universe.” On a similar note, a scene in “Cafe Noir” shows a character talking negatively about “D-War,” the high-cost, blockbuster flop directed by Shim Hyung-rae and released in Korea and North America in 2007.

“Every summer, we see a barrage of films that show us the end of the universe and how we can [prevent] it,” he said, giving a sarcastic snicker. “I’m bored to death with those movies.”

He became gentler when talking about the films that he loves.

“Whenever I become a silly old, lonely man, I watch movies alone in my home - ‘Late Spring’ by Yasujiro Ozu, ‘Pierrot Goes Wild’ by Jean-Luc Godard, ‘Notorious’ by Alfred Hitchcock, John Ford’s films from the 1950s. The list goes on. I watch these films and learn new things from each viewing,” he said.

Perhaps it was this strong faith in cinema that gave him the courage to veer away from his solid career as a critic to start directing, making himself vulnerable to a new generation of critics.

“My 30s and 40s passed by so quickly, with all the magazines and books I wrote for. It seemed like if I waited any longer, I would never be able to do what I’ve always wanted to do, which was to direct films - to create something beautiful.

I didn’t want to hide behind my success as a critic. So I took the leap,” he said.