Express yourself, but do it in the nude

Express yourself, but do it in the nude 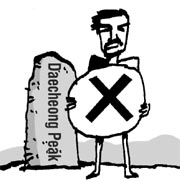 Freedom of expression is not limited to the spoken word. As the saying “tell people with every fiber in your body” goes, the body can be a more effective means of expressing oneself, especially if one is naked. Making oneself nude is a strong expression of one’s will, highlighting the desperation and sincerity of the person who wishes to achieve a goal.

That was the case with Lady Godiva, who is considered to be the originator of nude protests. She was the wife of Earl Leofric, the Lord of Coventry, in England, in the 11th century. Godiva sympathized with the misery of the tenant farmers who suffered from oppressive taxation imposed by her husband, and she pleaded with him to offer them a reprieve. Leofric said reluctantly that he would do it if she rode a horse naked through the streets. He demanded that she “show with every fiber of [her] body that [her] sympathy towards the farmers is sincere.” His intent was actually to make Godiva withdraw her request. But she decided to meet his challenge and achieved her goal. Since then, taking an action that goes beyond tradition and commonsense to gain a noble goal is credited to Lady Godiva.

Nudity is often used as a means of protest. In the West, taking off clothes or shoes can also signify a return to nature. That is plausible, considering that in Western culture clothes or shoes have been compared to straitjackets used to bind the arms of violent prisoners or mentally ill patients. Therefore, being naked amounts to a strong protest against a situation that is not natural or peaceful. Last year in January, people in Germany even did nude demonstrations to protest the installation of airport body scanners that reveal the whole body.

Nudity is a surefire way to attract attention, making it one of the most effective means of expression for an individual or group. That is why animal rights groups such as People for the Ethical Treatment of Animals often stage nude demonstrations.

Recently, Park Geu-rim, a representative of Seorak Green Korea United, staged a nude demonstration on top of Daecheong Peak in Seoraksan National Park. He was protesting against a controversial plan to install a cable car there. I hope his nude protest will help resolve the issue.

Now I wonder what kinds of extreme protest we will see in a society like ours that is so devoid of good communication.