Two years away, but race is on

Two years away, but race is on

Two years may seem to be a long time for most people, but for presidential hopefuls it’s just the blink of an eye. And political heavyweights are already starting to flex their muscles in advance of the 2012 presidential election.

The first one to unofficially jump into the race - and the acknowledged front-runner for some time now - is Park Geun-hye, who launched a think tank last month.

The former Grand National Party chairwoman’s move was interpreted as an early start to her presidential campaign because the think tank - called the National Future Institute - has 78 experts working to come up with policies for Park in the fields of economics, politics, diplomacy, defense, culture, welfare and media. Park’s campaign for the 2007 presidential election started in January of that year, giving her only eight months before the GNP primary. But now she has 24 months to prepare before the election, in addition to an unshakable lead in the polls.

Park is hovering over the 30 percent mark in most early polls on presidential preferability, while almost all other presidential hopefuls are in the single digits. In one survey, more than 40 percent of the respondents said they prefer Park as the next president. Her popularity is accepted even by her rivals inside the GNP.

“We never expected the number to go over 40 percent, but I guess that’s the reality,” said Representative Kim Yong-tae, a supporter of Gyeonggi Governor Kim Moon-soo. “Grand National supporters in the public apparently back the candidate with the best chance of winning.” 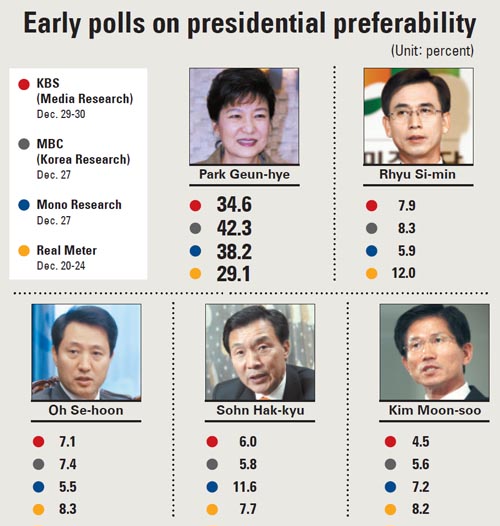 An aide to Seoul Mayor Oh Se-hoon also admitted that Park’s lead in the polls is formidable.

While the popularity of the 58-year-old three-term lawmaker - who is also the daughter of former President Park Chung Hee - has remained constant for the past three years, political insiders wonder if she will be able to break the jinx that has prevented past early front-runners from winning the race. At the end of 2005, two years before the last presidential election, the front-runner was not Park or then-Seoul Mayor Lee Myung-bak. At the time, former Prime Minister Goh Kun led the polls, but he was outrun by others only a few months later.

“When a front-runner leads a race for a long time, voters tend to think he or she is no longer fresh,” said Park Wang-gyu, head of the Korea Society Opinion Institute. “It’s easy for an early front-runner to be considered a politician from the past. Voters naturally try to look for a fresh candidate, thus an early front-runner can face crisis.”

Park and her supporters appear to be aware of the jinx.

“When you run a marathon, and when you are outrunning others by a large margin for a long time, you often lose your pace,” said a three-term lawmaker loyal to Park. “If a race is turned around at about the 35-kilometer mark, it’s extremely hard to catch up.”

While Park supporters said they would remain on their toes for the next two years, Representative Lee Jung-hyun, who often acts as a spokesman for Park, showed confidence.

“The race hasn’t even officially started, but her popularity is extremely high,” Lee said. “When we present her policies, her ratings will skyrocket.”

“We will lay the perfect foundation so she will be recognized as a prepared president,” he said.

While Park is a constant in the complex political equation, there is still the possibility of an alliance among her rivals in the GNP, often called pro-Lee Myung-bak politicians. Representative Chung Doo-un, a member of the GNP Supreme Council, said Park is the undisputed front-runner inside the party, but she may not be as strong once the primary season begins. Another Supreme Council member, Representative Hong Joon-pyo, said a possible alliance among pro-Lee politicians to field a single candidate will be a crucial factor in the GNP race.

During last year’s GNP convention to elect a chairman, about 65 percent of the delegates were pro-Lee members, while 35 percent were Park loyalists. That proportion will probably be the same when the GNP holds its presidential primary next year. That fuels optimism among pro-Lee politicians that an alliance could deliver them the nomination.

But as of now, Seoul Mayor Oh and Gyeonggi Governor Kim are still way behind in the polls. Oh has increasingly stepped up his political campaigns against the Democratic Party inside the Seoul Metropolitan Council over the free school lunch program.

Contradicting a previous statement on the issue, Oh has now left open the possibility of a run for president.

While Oh’s weakness is his frail support inside the GNP, Gyeonggi Governor Kim is seen as a politician with stronger ties with the party. He also maintained a close relationship with Lee Jae-oh, President Lee’s close aide and minister without portfolio, who handles political affairs.

Some, however, wonder if Kim will be able to pull off an alliance.

“When Kim Tae-ho failed to become the prime minister in August, Lee supporters quickly turned their eyes to Governor Kim,” a two-term lawmaker in the pro-Lee faction said. “He should have secured his position at that time. But since then, he repeatedly confronted President Lee and skepticism has spread in the Lee faction.”

Insiders are also watching Minister Lee Jae-oh after his political comeback last year. Since then, he has promoted the idea that the party should seek a fresh face as its candidate. He is a close confidant of the president, and his role as kingmaker may put an obstacle in front of Park Geun-hye.

Forming an alliance to field a single candidate to fight Park also appears to be the strategy for liberal opposition politicians, although there is no “star” candidate yet. In last June’s local elections, the opposition parties saw how alliances and fielding single candidates can help them win elections.

“While Grand Nationals are uniting with Park at the center, liberal voters have not made up their minds yet,” said Representative Kim Dong-cheol, the DP’s chief strategist. “When the race is shaped as a one-on-one match between conservative and liberal, it will be a battle worth fighting.”

Even though opposition political heavyweights are also far behind Park in the polls, Sohn Hak-kyu, Democratic Party chairman, is still seen as a potential rival. Sohn, a former Gyeonggi governor who defected from the GNP to the DP during the 2007 presidential primary, proved his strength when he won the DP chairmanship last October. In his acceptance speech, Sohn vowed to take back power for the Democrats in the 2012 election, and he reiterated the promise on Dec. 20.

“By forming an alliance with four liberal opposition parties, we will open up the path to take back the presidency,” Sohn said.

Other presidential hopefuls from the DP are Chung Dong-young, who was the party’s candidate in the 2007 election. The DP’s former chairman Chung Sye-kyun and former Prime Minister Han Myeong-sook are also heavyweight possibilities.

Rhyu Si-min, a lawmaker from the People’s Participation Party and an advisor to the late former-President Roh Moo-hyun, is a presidential hopeful for liberals outside the DP. Political insiders have said Rhyu can have a good chance if he is backed by liberals outside the DP and is able to pull off an alliance with the Democrats to become the pan-liberal candidate.

Rhyu attempted the same thing in the Gyeonggi governor race last year by winning the support of the Democratic, Democratic Labor and New Progressive parties. But he lost to Kim Moon-soo of the GNP.