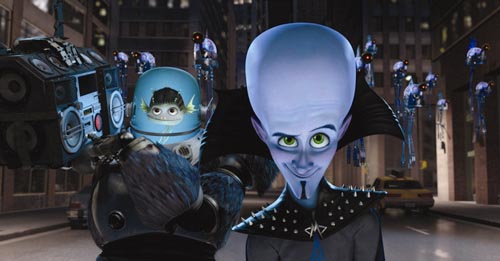 A screen shot of “Megamind,” which opens in Korea on Jan. 13. Provided by CJ Entertainment


A dastardly supervillain who turned evil because of a bad upbringing finds himself seduced to the good side to defeat an even badder guy. The movie is called “Megamind,” but didn’t we just see this last summer in “Despicable Me”?

The latest action comedy from DreamWorks Animation, “Megamind” features dazzling computer-animated design and action. Yet despite a clever hook - what’s a villain to do when he manages to defeat his superhero nemesis? - it’s a thin story that feels familiar and unfolds with no surprises.

The movie offers an amiably goofy voice cast led by Will Ferrell, Brad Pitt, Tina Fey and Jonah Hill, whose wisecracks are cute if not terribly memorable.

The story borrows liberally from “Superman” as both Megamind and Metro Man begin as infants on distant, dying worlds, dispatched to Earth in space pods. Metro Man lands in a loving foster home, while Megamind gets dumped among prison inmates, setting him on his evil path and creating his rivalry with his heroic foe.

Fey’s the Lois Lane stand-in as television reporter Roxanne Ritchi, perpetually the focus of Megamind’s attempts to ensnare Metro Man. Hill’s a geeky cameraman who’s in love with Roxanne and later becomes a new menace to Metro City as Megamind tries to fashion him into a replacement superhero after he actually vanquishes Metro Man.

The movie’s 3-D version bursts off the screen, sometimes distractingly as vehicles, explosions and even smashed buildings are hurled into viewers’ faces. Unfortunately, the underdeveloped story and characters seem to be there to service the visuals, rather than the other way around. “Megamind” opens in Korea on Jan. 13.