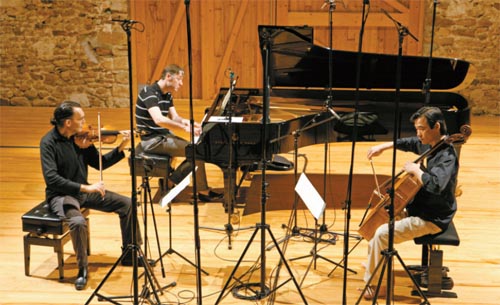 
When cellist Yang Sung-won released an album dedicated to the compositions of Czech musician Antonin Dvorak last November, he didn’t need to look for a place to record his music. Backed by the Czech Philharmonic, the recording was done at Prague’s Rudolfinum, which housed Dvorak's first cello concerto and is said to have an acoustic echo that allows the audience feel the music through their skin.

But one of the songs on the album was recorded in a less conventional space. The piano trio “Dumky” was recorded in a shed on a farm in France. With pianist Emmanual Strausse and violinist Olivier Chalier in tow, Yang headed out to a farm in eastern France above the Bordeaux region. The facility, built in the 1890s, has been a favorite of musicians since the 1940s.

“The recordings of a concerto and that of a trio should be treated differently,” Yang said. “The shed proved to be the perfect place for the sounds of the piano and string instruments.”

And like Yang, other classical musicians in Korea are starting to discover the advantages of recording in farm sheds and stables.

The particulars of these places surpass even the most high-tech concert halls. That is why more and more people in the classical music industry have been going out of their way to find similar places.

Oddly, the logic behind the beautiful music is in the walls. The buildings, some of which date back to a couple hundred years, absorb and reflect sounds because of the aged wood with which they are constructed. Like wine, wood matures over time which consequently turns them into the best sound system that nature has to offer.

Kim Jung-ho, the producer of Yang’s latest album, said that as the producer, he felt it was his responsibility to find a place to record that would fulfill the artists’ need for acoustic perfection. He was the one who discovered the farm in France.

“I always check where world-class musicians record,” Kim said. “Although Yang was the first Korean to try making a recording in the French countryside, many foreign artists have recorded there.”

Song Hyun-soo, director of Universal Music Korea, said that his recording studio of choice is a stable in the Neumarkt area of southern Germany.

That is where renowned classical musicians from Korea such as violinist Kim Soo-yeon and pianist Ji Yong chose to record some of their recent albums.

“The place is rectangular in shape, much like a matchbox,” Song said. “The fact that it is longer horizontally than vertically is what produces a richer sound.”

Another favorite space of Korean musicians is old churches.

“Top names in the industry are buying vacant churches and turning them into studios,” Hwang said. “The buildings allow the sound to reverberate and there is enough space to set up the necessary equipment.”

Some churches have even been converted to concert halls with performance rental fees that are lower than traditional concert halls. But for now, these are hard to come by.

“It’s expensive to rent an actual performance hall, but there aren’t that many churches in Korea that allow us to do this,” Hwang said. “That’s something that the music community needs to work out in the future.”