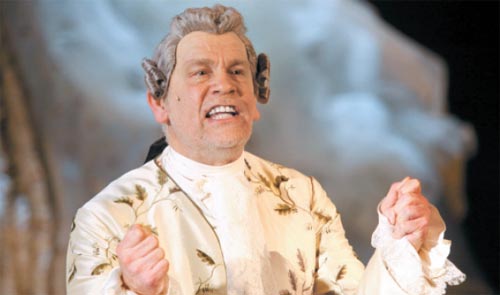 Actor John Malkovich performs on stage during a dress rehearsal of “The Giacomo Variations” at the Ronacher Theater in Vienna on Jan. 4. The play premiered the following day. [REUTERS/YONHAP]


VIENNA - For the second time in two years, Hollywood actor John Malkovich appears on the Vienna stage as an egocentric womanizer - but this time in an opera, where he gets to show off his singing chops.

In “The Giacomo Variations,” an opera-cum-play that had its world premiere Wednesday evening at Vienna's Ronacher Theater, Malkovich plays an aging Casanova searching for the meaning of life.

“It’s a genre between genres,” writer and director Michael Sturminger told AFP ahead of the premiere.

This is Malkovich’s second collaboration with the Austrian creative team of Sturminger and conductor Martin Haselboeck.

In 2008, they presented “The Infernal Comedy,” an extended monologue coupled with operatic interludes, in which Malkovich played Jack Unterweger, a real-life Austrian serial killer convicted in 1994 of murdering nine prostitutes.

Unlike their previous project, “The Giacomo Variations” is much more operatic.

And even Malkovich has lent his voice to it, performing airs from Mozart’s operas “Don Giovanni,” “Cosi Fan Tutte” and “The Marriage of Figaro,” alongside baritone Florian Boesch, with whom he alternates in the role of Casanova.

For Haselboeck, this piece - performed in English - has something for everyone, with its opulent costumes and rich sets, made accessible with popular operatic airs and a Hollywood actor.

“People who know Mozart, who know opera, will find many new ideas here. The others, a colorful opera piece with lots of costumes, lots of ambience,” he said.

Even in English, the essentially German-speaking audience could expect an unusual experience.

“The story of Casanova’s life is so clear and there are such beautiful images that you can experience an incredible deal, even without understanding a word,” Haselboeck said confidently.