Famed Korean film critic Jung Sung-il makes his debut as a director in this film, which is a meditation on the fleeting nature of love between a man and the women he meets. Through long takes, the audience is invited to think once again about the true meaning of love.

The story follows Yeong-su (Shin Ha-gyeun), a music teacher who is in a relationship with a fellow teacher Mi-yeon (Kim Hae-na) but falls out of love with her.

As Sun-hwa tells him her story, Yeong-su starts to fall for her but she, too, leaves him and he is left alone once again.

The film, which is more than three hours long, is based on two books - Goethe’s “The Sorrows of Young Werther” and Dostoyevsky’s “White Nights.” 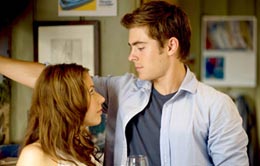 “Charlie St. Cloud,” based on a 2004 book of the same name, marks young actor Zac Efron’s first drama film as the main star. The movie was released in July 2010 in the United States and was met with mixed reviews from most critics.

It is scheduled to be released next week in Korea.

Charlie St. Cloud (Efron) is not your garden variety late-teen kid. He was a star sailor in high school and is ready to go to Stanford University on a sailing scholarship - yes, such a thing actually exists. And to top it off, he’s got a great relationship with his younger brother, Sam, something rare among teens in the U.S. these days.

But things take a turn for the worst on the evening of Charlie’s graduation party when Charlie and his brother get into a car accident, killing Sam.

Sam’s final wish is to never be left alone and Charlie takes this quite literally by getting a job at the graveyard where Sam is buried. Charlie begins to see and interact with a vision of Sam, playing catch and reminiscing about their time together.

The remainder of the movie involves whether Charlie can actually let go of the past with the introduction of love-interest Tess (Amanda Crew). Tess wants to sail the world, too, and Charlie must make up his mind about whether to keep his promise to Sam or to embark on a new journey in life. 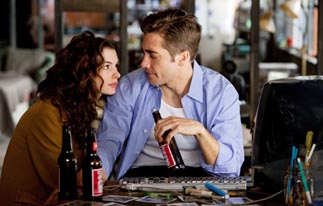 “Love and Other Drugs” is a period romantic comedy slash melodrama set in the not-too-distant past in 1996.

Jake Gyllenhaal’s Jamie Randall is a young man full of charm and uncrystallized ambitions whose work as a pharmaceutical salesman dovetails nicely with his large appetite for sex.

The film begins as a satire of the drug industry: Randall woos doctors and hospital receptionists - whether with a talk or a romp - so they’ll prescribe Pfizer’s drugs (i.e. Zoloft and Prozac) instead of its competitor’s.

But the film shifts gears when Randall meets Anne Hathaway’s Maggie Murdock, an artist with a bright personality, who sees through Randall’s game.

The two hit it off, on the floor, in bed, everywhere. There is a lot of beautiful people having sex. But Murdock isn’t looking for lasting love because she has early onset Parkinson’s Disease.

“Love and Other Drugs” then becomes a blend of romantic comedy and dying-girl movie. The concoction mostly works - it can be witty, somber, funny and sexy - and both Gyllenhaal and Hathaway are compelling, beautiful actors, as always.

Yet whether the audience finds the end result of the movie and its multifaceted and sometimes underdeveloped (when it comes to Hathway’s character) plot to be as compelling remains to be seen.

Directed by Ed Zwick, “Love and Other Drugs” was written by - in addition to Zwick - Charles Randolph and Marshall Herskovitz.