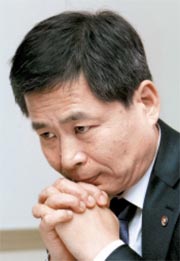 Jang Seok-woong, the newly appointed chairman of the liberal Korean Teachers and Education Workers’ Union (KTU), expressed great concern about progressive Seoul education chief Kwak No-hyun banning corporal punishment in schools after a scandal in which an elementary school teacher used excessive force on a student under the pretext of disciplinary action.

In an interview with the JoongAng Ilbo on Wednesday, the first since Jang took office on Jan. 1, the new leader said that “because Kwak adopted the policy without giving teachers some sort of preparation time, it is causing teachers to complain, calling it an invasion of their authority.”

Jang admitted that “it was wrong for the KTU to only criticize the government’s education policies,” and that “because KTU had been deciding on activities based on philosophies of core activists instead of listening to the public and its members, we started losing support.”

However, Jang, who has a two-year term, views “the appearance of a progressive superintendent of education will allow KTU to enter the mainstream of education now.”


Q. Teachers are complaining of difficulties in dealing with students due to a full ban on corporal punishments.

A. I, myself, had been a teacher for 30 years. I used to take troublemakers fishing and buy them lunch. [But] sometimes I would brandish a stick at them, and try to talk to them. Of course, corporal punishment should be banned. But there should have been more discussions among educational parties concerned before making final decisions. Politically exploitation of this issue is a problem.

The first reason is repression from the government. But there were internal issues as well. Although we do not acknowledge it, the public saw the activities of KTU as fighting for our own rights and interests. So support declined and members left. The main reason for the decline is because we were only busy pointing fingers at the government’s policies when we should have been leading educational agendas.

What activities do you consider failed to appeal to the public?

A typical case would be protesting against the teacher assessment system. The public thought that teachers should be evaluated. But as we were already getting assessed by the efficiency ratings, the KTU strongly opposed it. Eventually, it became a fight with the public, which is a losing game.

Jang said putting too much effort on opposing the implementation of the National Education Information System (NEIS) proposed by the Roh Moo-hyun administration was a mistake and the KTU missed an opportunity to reform the educational system. However, Jang is more hopeful now. He believes that six pro-KTU liberal education superintendents will help change the situation, meaning that the KTU will propose new educational policies and take the lead. Jang, though, is still against the achievement-level class system devised by the government.

Are you willing to provide names of the teachers who belong to KTU?

The KTU did not reveal the names of the teachers because union members could be intimidated in conservative regions. Of course, it should first be discussed, but I am confident even if the names revealed.

How do you predict this year’s educational situation?

As seen with the autonomous private high school issue, there are signs of failure in the government’s policies. This year, liberal education superintendents will start moving forward and we expect to receive acknowledgement by the government.

Students, parents and teachers are distressed because there is constant conflict between the central government and pro-KTU education superintendents.

I don’t see it as distress. Conflicts have occurred because transforming old practices or vested rights into new policies during a transition period are inevitable.

Ultimately, policies brought about by the liberal education superintendents will represent a new tide.

Can’t KTU be dismissed as focusing too much on standardization while disregarding competition for advancing academic ability?

There are tens of thousands of brilliant teachers who get selected from the teacher certification examination but fail to work at their best.

Measures to foster both achievement abilities and personality while acknowledging the teachers’ creativity should be considered. Teachers are gradually losing their spirit.