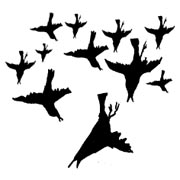 Dolphins once lived in the Yangtze River in China. The 2-meter-long, 240-kilogram freshwater dolphins were revered as goddesses. According to legend, they are the offspring of a princess who was drowned in the river.

But Mao Zedong ordered the dolphins’ capture during the Great Leap Forward as a part of a campaign to eradicate superstition and idol worship.

Thousands of dolphins instantly went extinct, making them the first large vertebrates to become extinct because of humans in 50 years.

Another creature that almost went extinct in China because of Mao Zedong is the sparrow. In 1958, Mao announced the Great Sparrow Campaign, which was initiated to kill sparrows that were eating farmers’ grain.

One of the most effective ways of killing the birds was to bang pots and pans. The birds were frightened by the noise and could not find a place to rest, causing them to die of exhaustion. But the curse of the sparrows continued the following year.

The sparrows had eaten more insects than grain, and after their natural enemy disappeared, the insects swarmed the fields, destroying the harvest.

The Great Sparrow Campaign come to an end only when 30 million people died of starvation in the Great Chinese Famine.

In the United States, dead birds are falling from the sky. In Arkansas, over 5,000 blackbirds fell from the sky and covered a town. In Louisiana, some 500 birds were found dead.

There are also reports of tens of thousands of dead fish floating in the sea. Some claim that it is a sign of doomsday from the Bible.

“The Seventh Sign,” a 1988 film about the end of the world, begins with a school of dead fish.

There are different theories about the mass deaths of fish and birds in the U.S., but directly or not, it is highly likely that humans are responsible. The earth is overpopulated by humans, causing other creatures to lose their homes.

The United Nations estimated that one species disappears every 20 minutes. The rate of extinction has accelerated 1,000 times.

Entomologist Edward Wilson once said that destroying a tropical rain forest and other species-rich ecosystems for profit is like burning all the paintings in the Louvre to cook dinner. A more horrifying reality awaits humankind. As the Great Sparrow Campaign of China showed, they never die alone.

When nature is hurt, it always strikes back and threatens humans’ survival. So it may be wise to read the signs and prepare for the disaster before it’s too late.