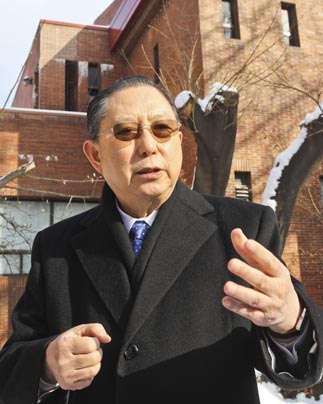 Rev. Lee Jong-yun said, “Seoul Presbyterian Church does not belong to me, but to God. I am merely his servant,” in an interview at the Korean Council of Presbyterian Churches’ centennial memorial hall in Jongno, central Seoul, on Dec. 30. By Cho Yong-cheol

It was the day after Christmas last year, but the Seoul Presbyterian Church in Daechi-dong, southern Seoul, was overcrowded with thousands of ardent believers, some who were wiping away tears. The faithful had gathered to listen to a sermon by Rev. Lee Jong-yun, who was retiring from his position after 19 years of service.

Lee founded the Seoul Presbyterian Church in late 1991 with 169 other devotees in an apartment he rented because they didn’t have a church building to practice their religion. Two decades later, the church has a building of its own and thousands of followers to fill it. Currently, there are around 20,000 members and the number of regular attendees is about 10,000.

It’s probably normal for Lee to have trouble letting go of the church he founded, but he vowed not to become involved in the often controversial process of power succession in Korean churches. Ministers often appoint relatives or close friends to take over for them after their retirement, and many retired pastors continue to dictate church policy long afterward through membership on a council of elders.

Lee said he is determined to be different.

“I will never preach at Seoul Presbyterian Church after my retirement,” he said in an interview on Dec. 30 with the JoongAng Ilbo at the Korean Council of Presbyterian Churches’ centennial memorial hall in Jongno, central Seoul. “I won’t even attend a service there. I will give a seat to my successor and let him work freely on his own.”

Lee came to his decision after an incident at another church where he was serving as the senior minister. When problems arose with the appointment of Lee’s successor at that church, Lee was kicked out. The experience caused him to resolve never to appoint his children or serve as a church elder after his retirement.

Twenty years have passed since then, and he has kept his word.

Lee’s successor is Rev. Park No-cheol. Park is not related to Lee nor are they of the same denomination. Lee said the decision to hire Park was made solely by the members of the Seoul Presbyterian Church. The congregation was familiar with Park because he had once given a sermon at the church.

“I asked the church members to make recommendations for my successor and I received a letter of recommendation with Park’s name on it,” Lee said. “Then the church council voted by secret ballot and the decision was unanimously approved by the council.”

Lee said the decision was made possible because he never thought of the church as his.

“I just thank God for working through me,” Lee said. “During voting to determine my successor, I didn’t become involved because I believe that the person was sent by God. How could I have dared to intervene?”

“Stagnant water is bound to corrupt,” Lee said. “Congressmen lower their heads because there is an election every four years. If a church does not want to work with someone, the person should leave.”

Lee said his life is the same as it’s always been except now he’s not going to church anymore.

“Getting up at 4 a.m. is the same as before,” Lee said, smiling gently. “But there is no daybreak prayer. I pray by myself at home. That was the biggest change I felt on the day after I retired. I’m a minister, I’m only human, and I felt something was missing.”