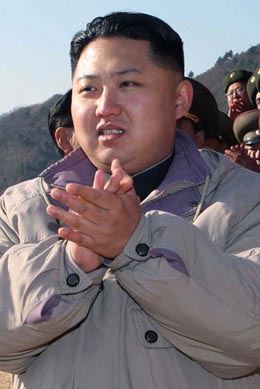 North Korea has been altering its political regulations to ensure that Kim Jong-un, chosen successor to North Korean leader Kim Jong-il, ascends to power without trouble from the military.

One of the new rules states that “all military activities of the Korean People’s Army are to be executed under the leadership of the Workers’ Party.” Another stipulates, “All political members placed in each military unit lead and command the unit’s general operations as representatives of the Party with full responsibility.”

The new regulations are seen as a way of keeping the North Korean military from rebelling against the government and Kim Jong-un. Analysts have wondered whether the military will accept Kim’s young, inexperienced son as leader.

Also, more power has been given to the Workers’ Party’s Central Military Commission, which Kim Jong-un was appointed vice-chairman of in September. The commission now has the power to “guide overall defense operations.” Earlier, the regulation said that the commission “commands military power.”

The revised regulations also specified that the Party’s secretary, the top post now held by Kim Jong-il, is the automatic head of the Central Military Commission. If Kim Jong-un inherits his father’s position in the party, he will automatically lead the military as well.

A revised regulation also states that the party convenes at will, with the scrapping of a clause that said a party congress was to be held every five years. Instead, the party is responsible for announcing party conventions six months in advance. The Workers’ Party is also now able to elect senior members and revise regulations through meetings of top delegates, rather than all the party members.

“The fact that they tailored the regulations to make a succession swift and easier in case of an emergency situation like the sudden death of Kim Jong-il is an important point to be made,” one government official said.

But according to the South Korean government, no festivities or celebratory proceedings are scheduled for the birthday of Kim Jong-un, which is today.

“We have not had any particular observations of such events,” said Chun Hae-sung, spokesman of the Ministry of Unification yesterday.

Intelligence sources say Jong-un was born on Jan. 8, 1984, but North Korean authorities are trying to convince the public that he was born in 1982 because it echoes the official birth years of his father and grandfather, North Korea’s first leader Kim Il Sung. Officially, Kim Il Sung was born in 1912.