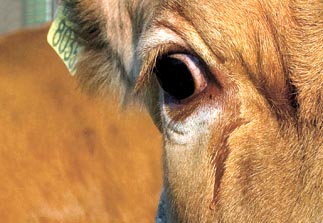 “Their eyes are so large,” said Lee Won-yong, 63, a cattle farmer in Dangjin County, South Chungcheong. “And they seem to tell me something. It’s so sad being unable to understand them.”

Lee stared at his 96 cows all morning yesterday because he was told the day before that they would all have to be slaughtered because a nearby pig farm was infected with foot-and-mouth disease. Lee resisted but realized his cows were doomed when the local stockbreeding office said they planned to slaughter them today. An official told him that up to 8,000 livestock on seven farms in the area have been slaughtered.

According to experts, it’s not only the animals or a farm’s bottom line that suffers during the culling that accompanies foot-and-mouth disease. Humans are emotionally affected too, especially when the animals are pigs and cows rather than chickens. Koreans are especially affectionate towards cows because they are an integral part of the country’s traditionally agrarian society and important assets to many families. Sometimes, the livestock are regarded as family members.

And as the highly contagious FMD continues to spread, it’s not only animal owners who get sad or even traumatized. Some officials and workers mobilized to slaughter livestock are said to be suffering from post-traumatic stress disorder, or PTSD, an anxiety disorder that can develop after exposure to a traumatic event.

“Although they can’t speak, most cattle shed tears when we drive them into a corner to be killed,” said Yoo In-yeol, 51, a forklift driver who has been helping bury slaughtered livestock in Cheonan, South Chungcheong. “I can’t do this anymore, not for a million dollars. Each day is a nightmare.” 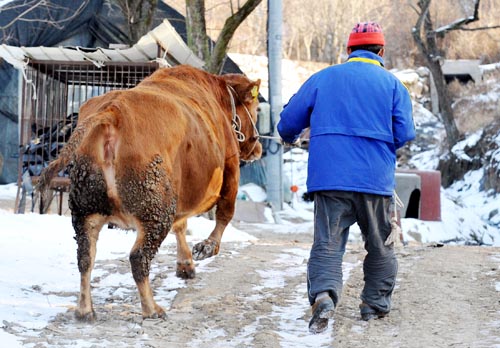 A cow, above, sheds a tear as it faces slaughter in Gyeongju, North Gyeongsang. By Cho Mun-gyu


When Yoo met with the JoongAng Ilbo yesterday, he was on his seventh day of digging holes to bury the dead animals.

“First I would dig the hole, then the officials used a needle to administer the euthanasia drug. Then the cows collapse within a minute or two. The scene is just too brutal to watch.”

Yoo says that every time he pushes soil on top of the dead animals, he weeps and asks to be forgiven. Even after leaving the scene, he suffers from nightmares and hears the cries of the cattle and pigs in auditory hallucinations.

“The tears of the cattle are a testament to how brutal this disease is to those docile animals,” said a health official who has been mobilized to slaughter infected livestock in Gangwon. “I can’t stop feeling sorry and guilty for what I’ve done to the innocent cattle and pigs.”

Local governments in FMD-infected regions are calling for medical support, and mental health centers have been set up in Dangjin County; Andong, North Gyeongsang; Wonju, Gangwon; and Goyang, Gyeonggi.

A mental health center in Hongcheon County in Gangwon has been calling livestock owners to check up on their condition. If an owner sound troubled on the phone, the center suggests sending a medical team to offer support.

“They can be under tremendous shock,” said an official at Hongcheon Mental Health Center.