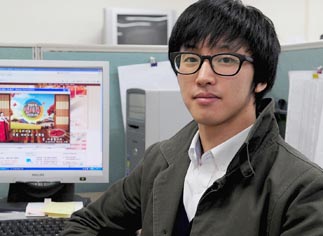 Noh Gwang-cheol is a sophomore majoring in electrical engineering at Konkuk University. And he also just happens to be the CEO of a kimchi company that makes regular donations to the underprivileged.

Jim Chi Dock is an online shopping mall and offers many varieties of kimchi. Last year, the site posted sales of 600 million won ($534,000).

Noh first became interested in kimchi while he was doing his mandatory military service in 2008.

“I happened to read an article about the high unemployment rate and people who were arrested for selling Chinese kimchi as Korean kimchi,” Noh said. “That’s when I decided to make kimchi that everyone could trust and eat.”

For the next year, Noh devoted himself to kimchi. He took kimchi-making lessons from the cook in his unit and researched production methods.

“When I was discharged from the service in September 2009, I started a small shop near my house in Gwangju, which led me to take an additional year of leave of absence from school,” he said.

Managing the business was not easy at first and for the first three months he only sold 50,000 won worth of kimchi.

He also struggled with finding a way to advertise the business but things changed when he launched an aggressive marketing plan that included promoting his kimchi at alumni events and on the streets of Myeong-dong, central Seoul.

His outgoing personality helped generate interest in his product and his monthly sales rose to between 50 to 60 million won.

The business even attracted a group of regular customers.

Despite his success, he felt he wanted to do something more.

“With the 60 million won in net profits I earned last year, I made more kimchi and sent it to orphanages and nursing homes,” he said.

In the coming year, he aims to enter the overseas market and continue his charity work.