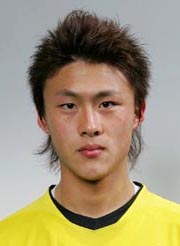 DOHA, Qatar - A forward with a familiar surname darts and dodges in training drills at the Qatar Sports Club Stadium with the Japanese national football team. Lee Chung-sung - known as Tadanari Lee in his native country of Japan - is a fourth-generation Korean-Japanese.

The 26-year-old forward for the J-League’s Sanfrecce Hiroshima had a brief stint with the Korean national team in 2004 when he was selected to the U-19 Korean team.

It didn’t go well. After joining the team’s training camp at the National Football Center in Paju, Gyeonggi, with high hopes for himself, he was shocked to hear some of his teammates refer to him as a “half-Japanese” with strong racial undertones.

Lee returned to Japan and was persuaded by Japan Football Association officials to become a Japanese citizen in 2007 and abandon his Korean citizenship. After changing his name to Tadanari Lee, he was selected to the Japanese U-23 national football team and competed at the 2008 Beijing Summer Games.

Japan does not grant automatic citizenship to people born inside its borders.

“I trained with the Korean U-19 national football team in the past,” said Lee. “I am a Korean person who was born and raised in Japan. Jong Tae-se mentioned this to the media before, but Korean-Japanese can be classified in three ways: Korean, Japanese and Korean-Japanese. Good or bad, we have two to three different identities.” Jong was born in Japan, holds South Korean citizenship and plays for North Korea’s national football team.

Coming off a strong season in Japan where Lee potted 13 goals this year, he was selected by the Japanese senior team manager Alberto Zaccheroni for the squad.

Despite giving up his South Korean nationality, Lee continues to use his full Korean name on his jersey in J-League competition and used his surname on the back of his Japanese national team jersey at the Beijing Summer Olympics.

“I don’t consider this the final destination, but rather a good place to challenge for bigger opportunities in my football career,” stated Lee in Korean. “I want to score at least a goal at the Asian Cup.”

Japan has been seeded with Saudi Arabia, Jordan and Syria in Group B and is set to take on Jordan today, Syria on Jan. 14 and Saudi Arabia on Jan. 18.

“I don’t know if I’ll get any playing time today. I just want to help my team win,” said Lee. “It would be great if we can play Korea at the Asian Cup.”

Lee said he knows Park Chu-young personally, but it is Park Ji-sung - national team captain and Manchester United player - who he most respects on the South Korean national squad.

“Park Ji-sung is a role model for many football players,” said Lee. “He plays in the English Premier League, and I also want to play overseas.”

Japan has fielded some of the most successful teams at the Asian Cup in the past two decades, taking home the trophy in 1992, 2000 and 2004.

Korea, on the other hand, has not won a title in 51 years.