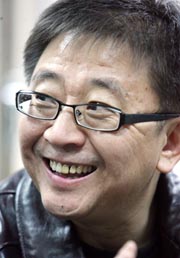 A retrospective of films by Korean-Chinese director Zhang Lu will be held at the Korean Film Archive in March, honoring his triumph in illuminating the lives of his compatriots, the state agency said last week.

Zhang, a novelist and a former teacher of Chinese literature at Yanbian University in China’s northeastern region, has drawn international acclaim with his portrayals of the dismal realities of ethnic Koreans on the edges of Chinese society and their encounters with North Koreans.

“Grain in Ear,” which won the Critics’ Award at the 2005 Cannes Film Festival, tells the story of a single mother who raises her child by making and selling kimchi on the street. Nothing seems to be happening in the small town, but for the woman who is an ethnic minority, life is unfair.

“Dooman River,” which was screened at the Pusan International Film Festival’s competitive section in 2010, displays Lu’s cool and detached camerawork in portraying the lives of ethnic Chinese along the river bordering North Korea and defectors from the impoverished North.

Zhang, a third-generation Korean immigrant, will visit Seoul to meet with audience members during the retrospective, the archive said.