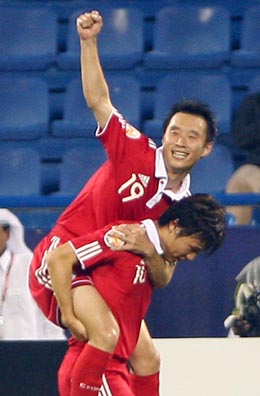 China’s Deng Zhuoxiang, bottom, is congratulated by teammate Yang Hao after scoring a goal against Kuwait on Jan. 8. [AP/YONHAP]

DOHA, Qatar - China’s new generation made a winning start to their Asian Cup campaign with a 2-0 victory against 10-man Kuwait in their Group A opener at the Al Gharafa Stadium here on Saturday.

Kuwait went a man down in the first half when Mesad Nada was sent off for an ugly foul on Yang Xu, and China made its numerical advantage count when Zhang Linpeng scored the opening goal shortly before the hour.

Deng Zhouxiang doubled the lead with a free-kick to put Gao Hongbo’s team - whose average age is just 24 - level with Uzbekistan at the top of the group. Uzbekistan beat Qatar 2-0 in the first group game on Friday.

“As the head coach, I’m very happy to win this game,” said Gao. “The first match is always very tough, very hard. For the first 30 minutes the Kuwait team did very well, but after that our team controlled the match. The four teams in Group A are very close, so any result can help. We will have to wait until the last game to see who will qualify.”

Kuwait had a strong penalty appeal rejected in the first half, and coach Goran Tufegdzic was critical of Australian referee Benjamin Williams in his post-match press conference.

“I don’t want to make comments about referees, but lots of people said he made many, many mistakes,” said the Serbian coach. “I think the relevant commission will have to look at the match and give a punishment for this referee.”

Kuwait triumphed at both the West Asian Championship and the Gulf Cup late last year, and they came close to taking an early lead here through Yousef Naser and then Walied Ali. They looked the more assured side but Nada’s needless dismissal prompted a reshuffle; the defender seeing red in the 36th minute for jabbing his foot into Yang Xu’s groin following a tussle near the touchline.

A tearful Nada hid his face in his shirt as he left the playing arena, but the cost of his rashness was made immediately clear as Tufegdzic elected to replace Naser with defender Fahad Awad. Kuwait could have gone into half-time ahead, however, a stretching Hussain Fadhel toed the ball wide from close range following a free-kick.

Ali almost marked his 100th Kuwait appearance with a goal when his curling free-kick was pushed away by China goalkeeper Yang Zhi early in the second period. Yang Zhi then survived a major scare when he dropped a Bader Al Mutwa free-kick right on his goal-line, with referee Williams turning a deaf ear to Kuwaiti claims the ball had crossed the line.

A stroke of luck saw China take the lead in the 58th minute. A corner from the left fell to Zhang on the edge of his box, and his left-foot volley may well have flashed wide had Fadhel not unwittingly diverted the ball into the bottom-left corner as he attempted to clear.

Scenting a knockout blow, China continued to push forward. Yang Xu fired over, before Deng stepped up to bend a left-footed shot inside the left-hand post from a 67th-minute free-kick. It secured a perfect start for the East Asian champions, who would have won by more had Nawaf Al Khaldi not denied the marauding Rong Hao with nine minutes remaining.