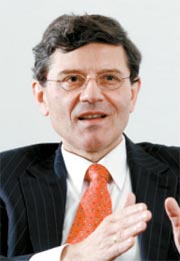 The seemingly lowered tensions on the Korean Peninsula, amid Pyongyang’s overture for talks, is a good sign the two Koreas will get a jump-start on their journey to become a unified nation, according to the German ambassador to Korea.

Hans-Ulrich Seidt said the year 2011, with many heavyweight political events ahead in the region, will provide good momentum for advancing the inter-Korean relationship.

The Korea JoongAng Daily sat down for an interview with Seidt at the Germany Embassy in Dongbinggo-dong, Seoul, last week. The 58-year-old ambassador of the country reunified 21 years ago has a unique perspective on the issue of unification.

“As far as the security situation and political situation on the Korean Peninsula is concerned, I think there is, after the terrible incidents last year, room for optimism,” Seidt said, referring to the North’s provocations, including the fatal shelling of Yeonpyeong Island. On Saturday, the North reiterated the suggestion it made last Wednesday for inter-Korean talks, in the most conciliatory gesture since the shelling.

“I would even say that if you keep a responsible and realistic outlook, there might be room for progress,” Seidt said. “So I am really looking forward with a lot of hope.”

The German ambassador noted that many important events lie ahead for the two Koreas. For one, the North next year will mark the 100th anniversary of the birth of its founder, Kim Il Sung. And this or next year also will likely see the North complete an ongoing power succession from Kim Jong-il to his son, Kim Jong-un. And in 2012, South Korea and the United States will hold presidential elections, he pointed out. There could also be a leadership change in China, he said.

“This means, if you want to move forward in a positive way, in a responsible way, in a realistic way, the year 2011 will offer you some opportunity,” he said.

Seidt said “unity,” meaning unification, is in the interest of the two Koreas, as it turned out to be the case for the two Germanys.

Germany, now the world’s fourth-largest economy, recorded more than a 3.5 percent growth rate last year, a real feat given the size of the economy and given the global economic crisis that many countries are still recovering from.

Seidt said unity, however, is a gradual process and does not come quickly.

Seidt suggested that a joint forestation project in the North, for example, could provide an economic impetus for the North as well as help the two Koreas move toward unification.

The Korea-European Union free trade agreement, signed last October, will take effect this year if the parliamentary approval process goes smoothly. The ambassador was confident that the European Parliament would ratify the deal in the first half of this year.

“As far as I understand, now all questions are settled, and this agreement will sail through smoothly,” he said. “I am convinced that it will not be negotiated [changed]. I am optimistic that we don’t have to worry.”

Seidt said the deal would benefit Korea and Germany, with the two countries heavily dependent on exports, in particular the car manufacturing, machine and tool building, and pharmaceutical industries on the German side and the car, consumer electronics and semiconductor industries on the Korean side. Korea is the third-largest Asian trade partner for Germany.

But, Seidt said, the deal would also help all of Europe free themselves of the financial problems currently hurting the region, he said.

“We need free and open markets where we can compete, so in this context, this FTA with Korea will also be an element that will contribute to speed up the modernization process in Europe,” he said.

Seidt complimented Seoul on the G-20 Summit in November as being a big success, an event that he said marked Korea’s joining a small group of trendsetters.

“In the past, priorities were defined for you by the countries that were running ahead of you. Now you have to define your own goals, and this will take long,” he said.

Fostering smaller economies and more globalization will be among the new tasks that Germany has embarked on and are now required of Korea as a leading country, he said.