All livestock in FMD areas to be vaccinated

All livestock in FMD areas to be vaccinated 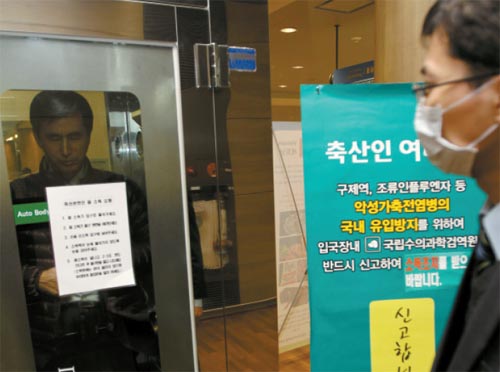 An official of Korean Veterinary Medical Association, left, is inspected yesterday at the Incheon International Airport as part of efforts by the government to block more foot-and-mouth disease (FMD) from entering Korea. [YONHAP]


The government yesterday intensified its response to the outbreak of foot-and-mouth disease (FMD), extending the use of vaccines to all animals in infected regions in an effort to protect the last four virus-free provinces in the country - North and South Jeolla, South Gyeongsang and Jeju Island.

According to the government, 2.17 million cows and 611,000 pigs will be vaccinated nationwide.

The Ministry for Food, Agriculture, Forestry and Fisheries held an emergency meeting yesterday and said it will conduct vaccinations on all farms in Gyeonggi, Incheon, North and South Chungcheong, Gangwon and even FMD-free North Jeolla.

“We found additional confirmed cases of FMD at a hog farm in Bonghwa, North Gyeongsang, and a cattle farm in Cheongwon, North Chungcheong,” the ministry said. A cattle farm in Daegwallyeong, Gangwon, was also found to have the virus, it said.

To prevent the highly contagious disease from spreading to uninfected regions, the government demanded that cities in neighboring virus-free areas vaccinate all of their livestock.

The North Jeolla government also held a meeting yesterday and said that it will vaccinate all of its healthy animals within a week.

Kim said the vaccination is needed to protect not only the region but South Jeolla as well.

Since a cattle farm in Andong, North Gyeongsang, was found to be positive for the virus on Nov. 28, the government has been unable to curb the relentless spread of the disease.

The central government said about 1.28 million animals have been or will be culled and it is now thinking of allocating about 1.3 trillion won ($1.1 billion) as compensation for farmers.

Meanwhile, several cases of avian influenza A (H5N1) have been reported, including a duck farm in Yeongam, South Jeolla, that was confirmed yesterday to be infected.

Seven poultry farms have tested positive for the influenza so far.

“If wild birds, such as migratory birds, were found to be infected with AI virus, the virus is highly likely to transmit to domesticated birds a week afterward,” a ministry official said.

“Since we found an increasing number of wild birds infected with the influenza, we think it would be difficult to curb the virus [in domesticated birds],” the official said.