Hackers attack: ‘Drive out the Kims!’

Hackers attack: ‘Drive out the Kims!’ 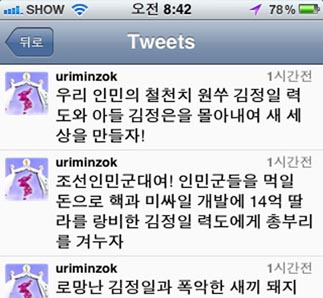 A screenshot of messages posted on Saturday on the Twitter account operated by North Korea’s state-run propaganda Web site. [YONHAP]

The Twitter account operated by North Korea’s state-run propaganda Web site sent out messages on Saturday attributed to Kim Jong-il and his son and heir apparent Kim Jong-un that urged a revolt against the ruling authoritarian family.

South Korean hackers claimed to be responsible for the incident, which coincided with Kim Jong-un’s birthday.

“Let’s create a new world by driving out rebels Kim Jong-il and his son Kim Jong-un!” read one post on Twitter from Uriminzokkiri, a Web site operated by the Committee for the Peaceful Reunification of the Fatherland.

The Tweet was sent at 7:20 a.m. Saturday along with three more Tweets containing anti-regime messages.

Users of DC Inside, a South Korean Web site, later claimed responsibility for hacking Uriminzokkiri’s Twitter account to send out the messages.

The Tweets were made a day after a two-minute animation was posted on YouTube, depicting Kim Jong-un as a ruthless killer. In the clip, Kim, after hitting people while driving a sports car, says, “People are useless.” It is unclear who created and posted the animation.

Despite an ongoing process of creating a personality cult for Kim Jong-un, North Korean media did not refer to any significant birthday events for him on Saturday.

Some Seoul officials said that the low-key birthday for Kim Jong-un, believed now to be 28 or 29, might be due to dissatisfaction among the North Korean public with anointing the young Kim as his father’s successor.

Meanwhile, Free North Korea Radio reported on Wednesday that the operators of Uriminzokkiri were under fire for failing to screen out anti-regime messages from its Web site.

The source said two days after the poem incident, scores of North Korean security officials went to Shenyang, China, where the Web site is based, to question the operators.