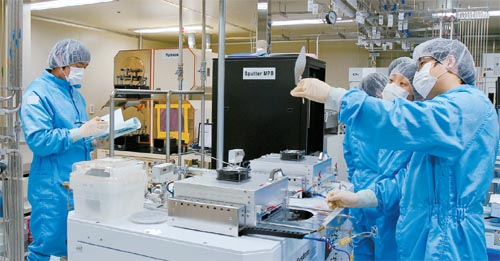 Researchers at Solar Cells Laboratory carry out experiments to improve the efficiency of solar cells on Dec. 30 last year. By Shin In-seop


Park Hyo-min admits that going to engineering school wasn’t her first choice when she mapped out her future after high school. But like so many other aspiring doctors who fail to make the cut for medical school, she chose to pursue engineering.

Now a 26-year-old graduate student pursuing a master’s at Korea University’s Department of Material Science and Engineering, she says that engineering was her calling after all.

“Honestly, when I was in high school, I wanted to go to medical school, but ended up studying engineering because of my scholastic ability test results,” said Park. “But now have I come to realize that scientific engineering fits me, and I love it.”

Park is just one of many who are undeterred by conventional wisdom in Korea that the engineering field is in crisis. In interviews, students, professors and researchers admitted that the field faces a variety of challenges - expensive tuition, a tough job market and a lack of respect for engineers in society - but they said that money and societal respect are not the be-all end-all of employment satisfaction.

“I don’t really think science engineering is in crisis at the moment. Who doesn’t struggle to get a job these days? If graduates are worried about landing a job, I sure wouldn’t want to be a liberal arts student,” said Park. “It is wrong how people think that entering the medical profession is a success and entering the engineering field is failure.

“Society places CEOs on a pedestal, but the educational system should also praise CTOs [chief technology officers],” she said.

Kang Min-gu graduated from a specialized science high school in 2000 before enrolling in the same graduate program as Park. He complained that engineers do not get as much respect as they deserve. He provided numbers from his graduating high school class as anecdotal evidence.

“Out of 90 high school classmates who graduated with me, around 30 went to medical, dentistry or pharmaceutical schools and 15 became bankers, patent lawyers, accountants or judges. Only about 30 entered the science field like me. Honestly, I envy friends who went to medical school. They earn good money and are considered successful in society,” said the 29-year-old.

“I like science more than medicine. I liked science as a child, and it fits me well,” said Kang.

He acknowledges that there are challenges in engineering, but suggested it makes engineers stronger. Most students who have the grades in high school go to medical school, he said, but only those really passionate about engineering remain.

Solar Cells Laboratory is divided into five teams that occupy three rooms in two laboratories. Mattresses and blankets are piled up in a corner of the lab for researchers who often spend the night.

“People talk about the engineering crisis, but I don’t really agree that it is a crisis. I do understand why people say that, though,” said Park Sung-eun, a 28-year-old doctoral candidate. “Compared to the time and effort we put in, we are not as respected in society as we deserve to be. It is disappointing at times to see how few from the scientific field fill top positions in corporations and in government.”

The students at Solar Cells Laboratory are led by Professor Kim Dong-whan from the Department of Material Science and Engineering.

“Media outlets look at one phenomenon and are quick to use the ‘crisis’ label, but it only drops students’ morale. They are doing great at our lab, and all this crisis talk gives students unnecessary doubts like, ‘What am I doing here like an idiot when everyone is saying engineering is in crisis?’” Kim said. “It is not that there are not any problems.”

He said the engineering field has still not fully recovered from the 1997-98 Asian financial crisis.

“It is true that the fields of science and engineering were thrown into disarray during the Asian financial crisis, and we have not completely recovered yet. But it is nothing we can’t handle. It is not at an uncontrollable level.”

President Lee Myung-bak touched on the issue in his Jan. 3 New Year’s address, pledging increased support for research and development.

“The government will strengthen its support for science, technology and engineering sectors ... Under the overall purpose of enhancing our growth potential and future competitiveness, we will increase our investment in R&D,” Lee said.

Compared to other countries, Korean universities do not fare poorly when it comes to churning out engineers. Last year, American undergraduate institutions awarded engineering degrees to just 16 percent of their graduates, compared to Korea’s 38 percent and China’s 47 percent.

Money has been a controversial issue among engineering students for years, with some suggesting the government does not do enough to support postgraduate engineering programs. Others complain that engineering Ph.D. students are forced to scrape by while medical students enjoy relatively comfortable financial assistance.

Tuition for Korea University’s engineering department is 7 million won ($6,200) a semester. The school offers partial and full scholarships. But students said there are many universities that do not have the same financial support.

Professor Kim said he emphasizes to his students that they get out of life what they put into it.

“Money and honor are not the be-all end-all for satisfaction. There should be a deeper passion beneath the work,” said Professor Kim.

“People only talk about problems regarding scholarships or gaining employment when they talk about the ‘crisis.’ But it is fare more critical to create an environment where students can find meaning from their work,” he added.


By Lim Hyun-wook [estyle@joongang.com]
South Korea's iconic fashion designer Andre Kim died Thursday after being treated for pneumonia at an intensive care unit in a Seoul hospital. He was 75. [Yonhap]