What we can learn from French outrage

What we can learn from French outrage 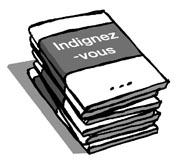 French writer Emile Zola is famous for the open letter titled “J’Accuse,” which was published in the newspaper L’Aurore on Jan. 13, 1898.

In the letter, he accused the government of anti-Semitism and the unlawful jailing of Alfred Dreyfus. He wrote: “When the truth is buried underground, it builds up and acquires an explosive force that is destined to blast everything away with it.”

By that time, Zola had already made a name for himself with works like “Germinal.” Yet 300,000 copies of the newspaper were sold in a day and the impact of J’Accuse was phenomenal. He asked whether France was a society that respects human rights and a country guided by liberty and justice. Zola’s outcry changed the case and the controversy ended 12 years later when Dreyfus was exonerated. Zola’s action is remembered as an example of how the desire for social justice and outrage against injustice changed history.

These days, a short yet provocative essay titled “Indignez-vous” is making waves in France. It is considered as great a shock to society as J’Accuse. Nearly 1 million copies have been sold. The author is 93-year-old former resistance fighter Stephane Hessel. A former diplomat, he participated in the drafting of the United Nations Universal Declaration of Human Rights of 1948. In his 30-page booklet, Hessel insists that the basic motivation of the French Resistance was indignation.

In the essay, he writes: “I would like everyone - every one of us - to find his or her own reason to cry out. That is a precious gift.”

His reasons for outrage include social polarization, discrimination against immigrants, and the violence that threatens democracy. He calls for nonviolent expressions of anger.

Today, France is troubled with suppressed anger. Many young French men and women are unemployed, and the 35-hour workweek has proven to be a failure. Hessel’s essay virtually broke the dam on the reservoir of outrage.

Positive expressions of anger are the driving force behind reform and revolution. Countries have overcome wars and revolutions and accomplished industrialization and democratization by converting indignation into a positive force.

France has a long tradition of outrage over injustice. In Korea, social justice is just a buzzword. But as we can see, we have much to learn from France.