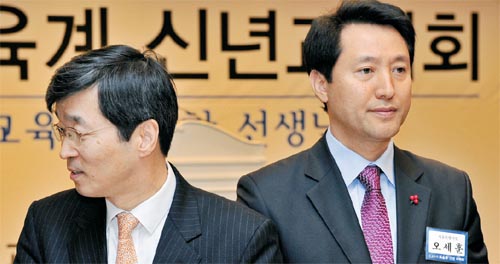 “As the mayor of Seoul, I can no longer have Seoul’s city affairs fettered by the free school meal plan,” Oh said in a press conference yesterday. “I want to ask Seoul citizens’ opinions on providing free school meals because I can no longer neglect the reality that Seoul residents’ future and quality of living have been overlooked because of the deadlock.”

Oh also expressed concern that the DP’s “populist welfare policies” could severely undermine Korea’s future and said that the party hasn’t explained to the public that additional taxpayer money will be needed to finance such “free policies.”

“The DP’s ‘free welfare populist policies’ could actually stir a national crisis if they are accepted indiscriminately,” Oh said. “The DP is hiding the inconvenient truth about a tax increase . . . It is pretending that the government budget is ‘a spring that never runs dry.’”

Oh said that the nation’s budget for this year is 309 trillion won and that the DP’s “free [welfare] policies” - ranging from free school meals, free public health service and a free nursery program - will cost 24.3 trillion won per year.

“If Seoul fails to block the ‘tsunami of free packages’ that are destructive to state affairs, this could harm the nation,” Oh said.

The city government and its council have maintained uneasy relations since the June 2 election, in which the DP won a majority of seats on the council.

While Oh, backed by the GNP, opposes the free school meal program and excluded it from this year’s budget, the council slashed funding for Oh’s key projects and created a new 69.5 billion won fund for school meals. GNP councilors boycotted that vote.

The Seoul city government plans to take this matter to the Supreme Court and is even considering seeking an injunction from the Seoul Administrative Court.

Oh’s announcement yesterday comes after Seoul Metropolitan Council Chairman Heo Kwang-tae officially enforced the budget - which includes the free lunch program and went into effect on Jan. 6 two days after the mayor refused to sign the budget into law.

Political observers say Oh - a former star attorney turned politician who is regarded as a potential presidential aspirant - is betting on another political showdown.

In 2004, Oh became a political dark horse when he sponsored a law regulating campaign financing. The law, nicknamed “the Oh Se-hoon law,” banned politicians from taking political funds from conglomerates and it also slashed the amount of money a single individual could receive in political donations from 120 million won to 20 million won. Oh’s law stirred anger among some politicians.

In a surprise move, Oh declared he wouldn’t run in the April 2004 legislative elections in what he said was a bid to foster “clean politics.”

After ending his voluntary two-year exile from politics, Oh won the Seoul mayoral election in July 2006 and was re-elected in June 2009.

Under a law on metropolitan governments, a governor or mayor can ask for a referendum on matters that could have a significant impact on residents. A third of residents have to participate for the vote to be valid.