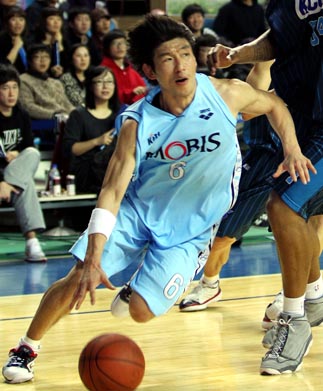 A new fan-favorite has emerged to take over from retired guard Lee Sang-min. Yang Dong-geun, 30, of the Ulsan Mobis Phoebus topped fan voting for the 2010-11 KBL All-Star Game by receiving 40,788 out of 60,385 total votes, according to the league.

“I feel obligated to treat the fans at the All-Star Game. It’s not like I can dunk or anything. I think most fans voted for me out of pity, thinking that I would not receive any votes,” Yang joked. “I’m a bit awestruck to have received the honor, when there are so many players in the league that are more talented.”

Yang is not a flashy player by any means. He is averaging 15.7 points and 5.7 assists for the defending champion Mobis.

“I thought that Lee Seung-joon [of the Samsung Thunders] would be the obvious choice,” said Yang. “He’s a good-looking guy. Seung-joon looks good even without washing his hair, but even when I’m looking my best, people tell me to take better care of myself.”

Lee Sang-min, who retired from the league at the end of last season, had earned the most votes for nine consecutive seasons starting in 2001. He took home MVP awards in 1998 and 1999 and was the KBL Finals MVP in 2004.

The All-Star game pits the Dream team against the Magic team.

All-Star weekend will be from Jan. 29-30 at Jamsil Arena in Seoul, with the All-Star Game taking place on Jan. 30.

The Rookie Challenge on Jan. 29 pits the league’s top rookies against the best sophomore players, while the Skills Challenge, featuring dunk and 3-point contests, takes place over both days.